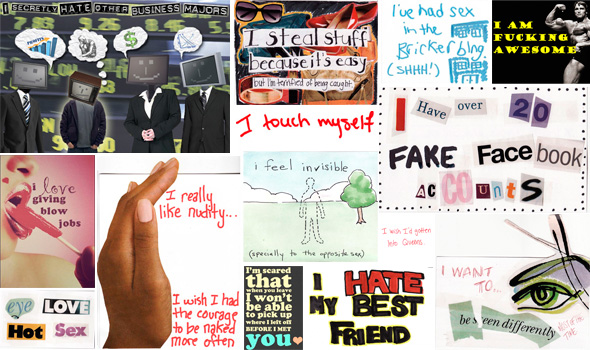 Some families hold secrets, our friends may have secrets, and even Wilfrid Laurier students have secrets. The LSPIRG working group “Laurier Secrets” is an open community where people can anonymously share their own secrets by creatively writing them on cards and sending them in. This project is inspired by PostSecret, the original secrets project, because one night, a man had a dream…literally.

Frank Warren was in Paris when he had a dream that three postcards he had put in his nightstand before falling asleep had messages written on them. When he awoke, he tried to recreate the postcards as seen in his dream. Since then, every Sunday he would create work called the “reluctant oracle project” and then release it for the world to discover. A few Sundays later, PostSecret started, where people would write their own secret on a postcard, decorate it, and submit it anonymously to Warren. Since 2005, thousands and thousands of cards were collected and later displayed publicly (on the website, Facebook, conferences and nation-wide talks by Warren) and even published in a series of books.

Warren’s motivation and purpose of this project is three-fold; he believes the homemade postcards allow the author to set free a secret they are holding within. In an almost therapeutic way, the secrets are inspiring to those who read them, and give them hope if they identify with the secret. Lastly, it is to create an anonymous, open community where everyone is accepted. At Laurier Secrets, we hold the same values and they are specifically why it began in the first place.

University communities are filled with students who are experiencing an array of events, emotions, obstacles, and going from one lifestyle before university, to another when entering university. Laurier Secrets gives the university community a chance to express themselves and tell their story anonymously in hopes of releasing something they have possibly kept inside, or simply something they want others to see. The fact that people are able to expose their secret to the outside world shows how strong they are, and even if they are not, their secrets will give them the comfort of knowing they are being heard. Laurier Secrets also gives people the opportunity to view and connect with others’ secrets giving them the security of knowing they are not alone in this world.

We could all use that secure feeling to help us get over the bumps in life. If writing a secret allows you to bury a burden or empty your system, then a homemade postcard is waiting for you.

Laurier Secrets displays secrets at booths and online, where people can create their own cards. To submit secrets visit the HUB drop box, the Club Laurier website, and Facebook at (Shh!) Laurier Secrets.