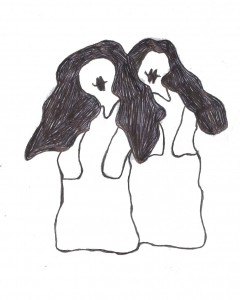 The rules to faking confidence replay in her head through her mother’s malicious voice as she walks down the street. “Shoulders back. Head up. Stomach in. Chest out.” She’s conscious of people staring at her as she passes them, but she refuses to look them in the eye. For if she does, she knows what she will find. She will see their criticism, their judgment shrouding her appearance, repulsed by her imperfections. Yet, she can’t help it. She sneaks a peek at a man, who upon seeing her curiosity, tentatively smiles at her in their passing. His smile seems friendly and interested, but she knows the truth, so her eyes drop immediately. She understands his smile; he’s mocking her. She rushes the rest of the way, ready to bolt into the solitary confinement of her house. She calls out with no answering reply, and feels relieved that nobody’s home.

Her stomach growls and she suddenly feels dizzy. She tries to count the hours since she has last eaten, but she runs out of fingers. She walks into the lavishly decorated kitchen and reaches for the fridge. It’s locked. She doesn’t check the cupboards because she knows they’ll be locked too. She doesn’t even bother to read the accompanying note on the marble counter. She knows they only lock up when she needs to drop a few pounds. She drags herself to her bedroom and begins flipping through the stack of freshly placed magazines on the edge of her bed. With a sigh, and almost routinely, she strips down to only her undergarments. Dreadfully, she pulls the sheet off her three-paneled body mirror. She analyzes, measures, pokes and prods, but nothing satisfies her. She begins to cry, softly at first, until the conjured images of herself makes her shake. Through her blurred tears she notices her metal makeup kit, and without thought she smashes it into the mirror. Chards of glass burst from the frame, falling lifelessly to the floor. One jagged piece catches her eye and she thinks of its unique beauty. Its sharp edges glint in a peculiar way, and as she presses it to her flesh she thinks of how uncommonly soft it feels…

In genuine regret, a stranger whom upon reading the obituaries, commented “What a shame. She was such a beautiful girl”.

That’s just what her mother would have wanted to hear.