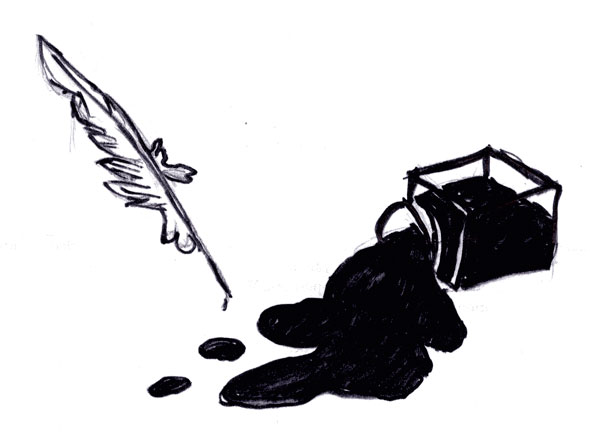 When I turned eleven, they found me in the orphanage. My orphanage.

There were blood tests. And references made in hushed voices to something called deoxyribonucleic acid. And scientists muttering inaudibly all around me.

They had been looking for me.

They had been looking for me, and when I turned eleven, they found me.

There was a doctor there from your hometown. He said he had a map of you, he said. He said it led to me.

“You have greatness in you now.”

They said I would be great, they said. That I would make great things. Greater even than the eight ‘greats’ required to describe my relation to you, William. They told me I had a gift, passed down from the sixteenth century, and that my gift gave me “historical significance.”

And then they gave me your last name. As an orphan, my title was negotiable. They took my name from me and gave me yours, with all the expectations that accompanied it.

When I turned thirteen, I wrote. I wrote, William, just like they told me to, but it came out all wrong. Your “gift” brought me to a school for the “gifted,” but I couldn’t give it anything. The writing I wrote was too ordinary. Too much like a thirteen-year-old boy’s. It didn’t shatter anything. And their line was always the same.

“Surely we would have expected better from you, child. Writing is in your blood.”

At fifteen, I staged a play at a modest theatre about a blind man and God, and it opened to an enormous crowd and its collective disappointment. Again expectation beat me down, its steady hand casting a shadow deepest black between blows while I tried in vain to protect my thousand existing bruises.
The reviews called it a waste, William. They called it a waste and they called me fifteen.

Before I turned twenty I did the logical thing, got bored and fell in love. I tried my hand at poetry: ballads of adoration and infatuation, twenty altogether. The object of my affection read each effort once and saved them all in a shoebox marked in pencil, which she placed in my arms the day she left.

“Thanks, but I will never love you, and they’re just not sonnets, are they?”

Are you sitting quietly?

You ruined what life I had, William. I spent twelve years crushed under the Lose Weight Exercise of the “greats” that precede the only name I will ever have for you, and I just can’t breathe anymore. Your legacy has left me to define the human condition in the very age that has murdered it, and my every attempt lets down, sputters, fails to blow away. This is all I’ve known, William, and there is no alternative. With so much to be, I am but little. The King is dead, the Queen is dying, and the only tragic heroes we have left are ourselves. And you yourself taught us how tragedies end, William. Are you sitting quietly?

I never said I wanted to be a Shakespeare.

And now I’m not even sure that I am.

So I will sit quietly for all