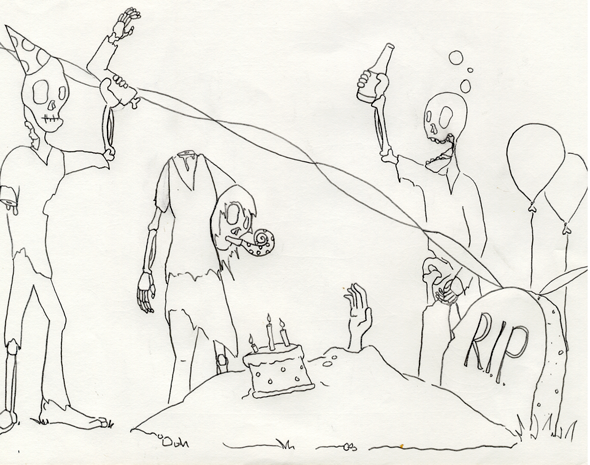 While death is not something that, strictly speaking, I look forward to, there are admittedly some reasons why I wouldn’t totally object to its occurrence. First of all, no more traffic. There are few things I hate more than travelling at less than 10 miles an hour in an automobile, and given the increase in the amount of cars on the road, I can’t see this problem becoming any less frustrating. As an aside, this alone is enough to convince me that biomedical gerontology is a complete waste of time. A thousand years of red lights? Fuck that.

Secondly, the sudden freedom from having to plan. People who know me will tell you that I am an organized person. I am not. Thus, the idea of not needing to look at a calendar – ever – is a fairly appealing one. I mean, I’ve got no idea what I’m going to do an hour from now. Can you imagine, then, how upsetting it must be for me to try and schedule stuff a week down the road? The day that the only recurring event in my Google Calendar is ‘8am-5pm: Decompose’ will be a sweet one.

There are a few other upsides to death as well. Don’t have to worry about the weather. Don’t have to spend hours figuring out whether my garbage is recyclable or if it goes in the green bin. And as I understand it, people’s Twitter accounts die with them, so that’ll be nice too.

Last thing to look forward to? My funeral, of course. Now, keep in mind that this is only a rough outline, but I’m very seriously committed to trying to pull this off: I want to be catapulted into my grave. And I don’t mean flung from some little wimpy toy, I mean I want to be launched into the air from a siege engine. And it needs to be a surprise too – get everyone to the gravesite, do some eulogies, get people a little misty eyed, even have a phony casket to lull the attendees into a false sense of security, but with a red fish carved into the side so that the more observant guests will think about it later and wonder why they didn’t see the whole thing coming. And then, right when emotions are really running high, flip on Holst’s ‘Mars’ just before the first crescendo, set off fireworks behind the crowd to get everyone’s attention, cut loose and fire me into the open grave from a hundred yards away, right over the audience while they panic as if under attack. If you remember the funeral scene from the first Hot Shots! movie, you’ll know the kind of effect I’m going for.

Of course, there are still some details to be worked out. How does one build a catapult and find a reliable team of catapult operators in our post-medieval age? Should I be fired in a casket, or should I just be allowed to go sailing through the air, arms flailing? Is this legal? But these are minor issues that can be worked out later.

Before I end, I must confess that, in spite of what I’ve said, I would ultimately still regret dying. Primarily because I really, really want to see this funeral. Like, it’s gonna have a catapult, and the food should be pretty rad too. So don’t be surprised if I end up just faking my death.