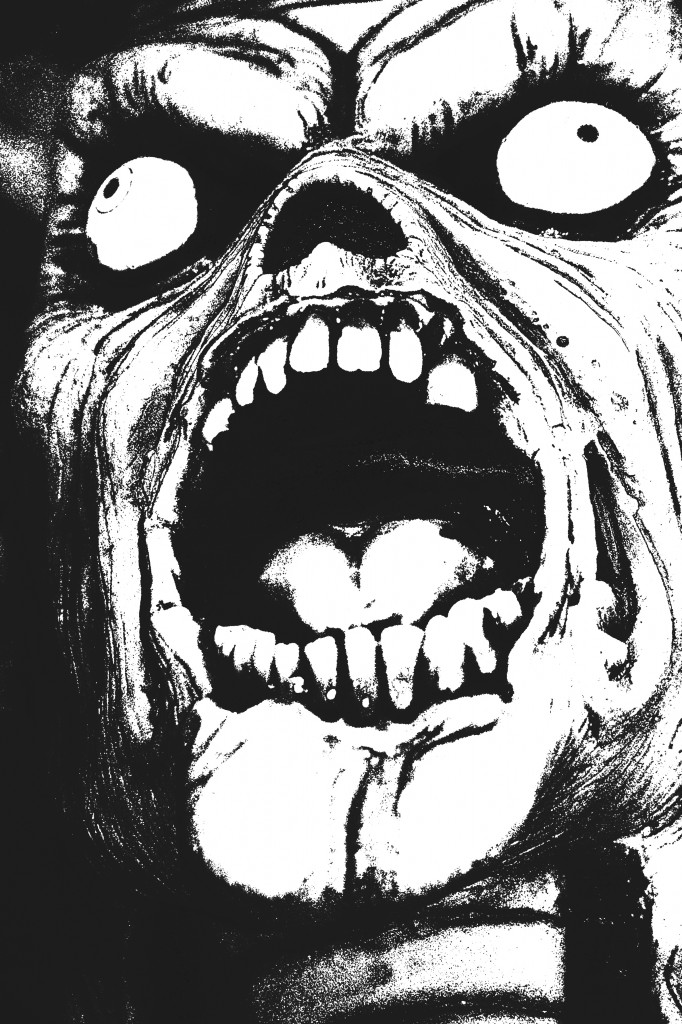 In the beginning, there was Darkness, and then, suddenly, there was Light.

Darkness was afraid of Light and ran from it, and as Darkness fled, Light chased after it, and Light grew until it encompassed all that it could see, and Darkness fled until it was out of sight, and that was the first day.

Now Light looked around at that which it illuminated, and above, saw a surface, and Light found it good and pure, and passed a hand through it, and named it Sky. Then Light looked below and saw a surface, and it was smooth and beautiful. Light passed a hand over it and named it Earth. Then Light looked further still and saw that, as Darkness had fled, it had distorted Earth’s surface with footprints, and had left huge, jagged uprisings in its wake. And in its hurry to escape Light, Darkness had stumbled, and had created huger rifts still, and when it had stumbled it had cut itself, and its blood had dripped in the rifts and had filled them. Even though Light tried to peer down, its glow could not illuminate the depths of the caverns and the thickness of Darkness’ blood, and it feared to go there and found them cruel and tainted, and cold and lonely, and it left them to Darkness and called them mountain and Sea.

Now Light grew angry at Darkness for disturbing the purity of their world, and went searching for it, but Darkness knew that Light was coming and fled from sight to the far side of Earth, and Light followed it, and that was the second day.

From then on, Light continued to search for Darkness, and he placed a great lantern in the sky which he called Sun, so that he might find darkness wherever it was and snare it. But Darkness feared light, and so he placed a mirror in the sky which he called moon, so that he might see Light approaching and could flee to the other side of Earth. And so Time came to be, and to pass, and continued on ever after.

Now as Light moved about Earth’s surface, his warmth brought Earth into consciousness. And Earth embraced both Light and Darkness as her creators and took them as parents. Earth saw the failings of Light and Darkness, and the discord they had sown, and she wished to have children of her own, and to provide for them, and care for them. Earth hoped to show Light and Darkness of their failings, and to bring them together. And so, desiring children, Earth went to Sky and, partnering with him, gave birth to all creatures. These creatures roamed across Earth, and took a mate, and together went to the region which suited them best. The children gave names to these regions, and settled there, and soon came to embrace either Light or Darkness as their favourite and learned much from their chosen grandparent.

As time went on, Light and Darkness came to draw their grandchildren into their struggle; they spoke to them and whispered in their ears as they slept, imploring them to fight amongst themselves as a means of striking against the other’s favourites. The children did this and soon, war had begun between many of Earth’s children. This angered Earth, who had sought to unite her family, not to see them further divided, and at times, her anger would boil over and she would act against the children who had displeased her, shaking them from her back, burning them with her blood or blowing them with her breath. At other times, it was Sky who would become distraught or displeased by the actions of his children, and he would weep in sorrow or attack in anger as he saw fit.

In a last effort to end the feuding of their children, Sky and Earth came together once more and created two special children in which Sky took particular pride. He gave them distinct titles of Man, and Woman, and into Man he put a part of his own essence, and into Woman Earth placed a part of hers. To these children Sky taught special things, and in turn made them special. And he told them that they would take care of their brothers and sisters and mother, and that he would be watching them from above. Sky told them this, and they listened, and they did not listen; he told them that if they failed to uphold this task, then he would come again to greet their mother Earth, and that united, they would exact a terrible vengeance. And so Time passed on. And eventually, after Man and Woman have failed in their task, their mother Earth shall succeed in hers and Light will find Darkness, and Sky shall be reunited with Earth, and all will become nothing once more.