I learned more from watching Humphrey Bogart smoke a cigarette than I did from reading any book. When I was a kid, things were different. We grew up tough and we grew up fast. We road our bikes down alleyways like we were gangsters or PI’s from the 40s; like they were our streets. It was that small town complex that made us all want to be big city tough guys. Half of us barely had a dime to our family’s names, and the other half had it all: silver spoon in mouth. But all of us knew what we wanted: to get out of town and fast.

I was 16 when I had my first cigarette, cruising around with buddies in my semi-broken down beater listening to Frank Zappa and the Rolling Stones. I was done with that tough guy shit and I knew I was becoming something else, I just didn’t know what yet. I used to talk with my friends about going to Africa and helping the poor and the sick but I still haven’t made my way there yet. I’ve made it to a lot of other places though, just nowhere really poor and nowhere really sick. When you get older there’s less time for the things you want to do when you’re doing the things you’re supposed to do.

I did the University thing; got a degree or two. Studied my ass off between the good times. Drank wine and smoked grass under the stars talking about Truffaut, Haneke and the Grateful Dead. Every once in a while we’d light cigarettes and quote old movies. I’d always quote Key Largo or the Treasure of the Sierra Madre. It’d bring me back to the old days, riding bikes with buddies through back alleys and side streets of our small, dying town, with nothing to do but shoot the shit and cause trouble. Whether our parents were around or not, all we had were each other and our cigarettes. Our senses of selves and who we wanted to be weren’t formed in our homes and schools; they were formed on those starry nights with nothing to do but ride around, singing songs and quoting old movies.

I don’t get to do much of any of that anymore. Life seems to get in the way these days. Everyone’s busy and grown up, starting careers and making names for themselves; putting their degrees and experience to good use. And there’s nothing wrong with that! Hell, I value my education and my upbringing! It’s given me more knowledge and more worldly experience than I would have ever gotten on my own in two lifetimes. But every once in a while after I’m done school and I’m done work, there’s nothing that stops me from lighting a cigarette, tipping my hat down and thinking about what kind of trouble I can get myself into tonight. 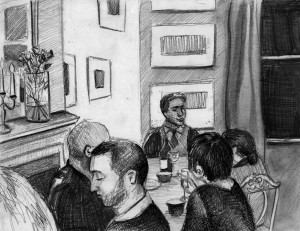