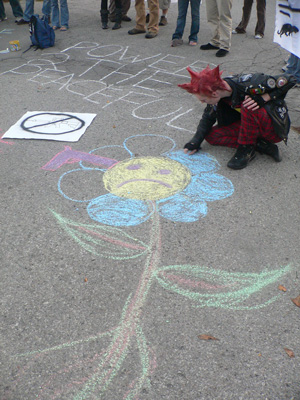 There isn’t a day when I flip through the television channels and don’t come across some sort of placement by United Way, or some other humanitarian organization. We are given a view into a world of despair and hopelessness. These people (seemingly only women and children) are made to live in unbelievable poverty, hungry and dying.

Growing up in a ‘first world’, wealthy nation, I was led to believe that this was only happening in these ‘poor’ nations; it was horrible, but it didn’t directly affect Canada. Not true. Granted, the level of poverty afflicting the people of, say, Sub-Saharan Africa, is much greater than that of our own nation; but, that is not to say that we do not have our own level of poverty.

There doesn’t seem to be any clear definition of what is considered poverty in Canada; so, Statistics Canada has come up with its own method of deducing who is poor enough to be considered poor. The definitions of “low income” which are often used by the National Anti-Poverty Organization and other groups to help characterize poverty in Canada include: the Low Income Cut-off (LICO), the Low Income Measure (LIM) and the Market Basket Measure (MBM). Now, I could spend another 500 words attempting to explain the logic of these definitions; however, I’ve quite honestly never been too great at understanding how taxes work. So, to get a better understanding of how the government reckons if a family is poor or not, I’d suggest going directly to the www.statcan.ca and looking up Income in Canada.

So, we have a vague idea how the government figures out what ‘poor’ actually is in Canada; but, what does it mean to the people living in poverty? Well, the poor live with insufficient and second-rate quality food. They sleep on the streets, or in homeless shelters. They are at greater risk of poor health.

In 2005, at least 3.4 million people – or about one in ten individuals – lived in relative poverty in Canada. This included nearly 800, 000 children. According to Statistics Canada, the demographic groups that are most affected by poverty include aboriginal people, people with disabilities, single parents and their children, and recent immigrants to Canada.

Furthermore, the poor of Canada are not always visible. Not all of the poor live on the streets or in homeless shelters, many lived on your street, or went to school with you. There’s a commercial on t.v, with the women who opens a can a food and the roof blows off her home; or, the man who turns on his lamp and he is then homeless. They have to choose between shelter and food, or electricity. Many cannot afford both.

How is this allowed to happen in one of the world’s wealthiest nations? When did it become acceptable to let our own live without some of the basic necessities? How can we go out and buy into these materialistic notions, without thinking of our fellow citizens who can barely afford to feed themselves or their children.

I am not asking people to stop consuming, obviously I purchase plenty of things I do not ‘need’. All I ask it that people make an effort to contribute to bettering the society we live in. Donate to the food bank, they need it. And, you know, realize that you have the moral responsibility to help others.

Remember, the poor of our own nation are some of the truly forgotten.