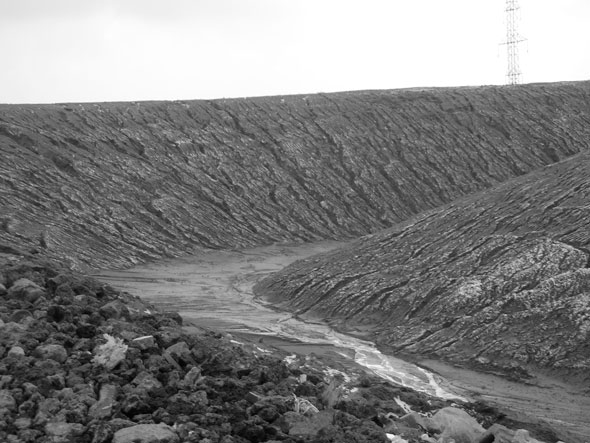 A lot of a little bit is still a lot.

In the game of Jenga, you take a block from the bottom of a well ordered tower and try to place it on top of the pile without upsetting the tower’s delicate balance. The game only ends once the pile topples over when one of the players choses a piece which upsets the balance of the tower system.

The earth that sustains us is a much more complex system and is quite a bit less ordered than this simple game, but in essence we are taking blocks of the earth from the base of the tower (the part that holds the whole thing up) – the food bearing fertile soils, the life giving rivers and the oxygen releasing forests – and placing them on the top of an increasingly wobbly tower in the form of ‘developed’ land. These blocks are usually the sprawled suburbs of a bulging city replete with single-family homes, roads, and SUVs.

The development paradigm has slowly been ingrained into our minds. Development and economic growth are ‘progress’, though I have never seen a definition for over-development. We may come to understand that once a society can no longer sustain itself, even though it is technologically ‘advanced’, it has been over-developed. How many blocks can we take from the bottom in the name of progress?

Tools do exist to help in the planning of cities, regions, provinces, and whole countries, but from my research these tools are at best inadequately used. Take for example environmental impact assessment (EIA). This is the main tool used to assess developments in our country but is not used for all projects and is not used to stop projects from happening; it is used to reduce and mitigate their impacts. On top of this, not all development projects are subjected to an EIA and many large projects (like forestry in British Columbia) are exempt from the process.

Strategic environmental assessments review the plans, policies, and programs of a government and are supposed to be used on everything our Federal government does. These should be the long-term and comprehensive guiding documents for all actions and developments.

How many forest valley blocks, cut one at a time and ‘developed’, does it take to ruin an entire watershed, a corridor of habitat or an ecosystem? Cumulative effects assessment is supposed to be a part of all EIAs and are intended to gauge how the incremental development of an area, that is, how many small projects in a certain geographic area can react jointly to create unpredictable negative environmental effects; a case where the sum of the parts is greater than the whole.

Water is used to drink, to apply to our lawns, to put into bottles and to produce just about everything. Some cities (such as Waterloo) are running out of water as their sources are drying up. To mitigate this, municipalities are importing water over great distances but are using ever increasing amounts. In addition to this, pollutants which make the water poisonous to animals and plants alike are constantly being dumped into our water through agricultural runoff and industrial/residential effluents.

How many blocks of unsustainable water transfers and water use will it take before everybody is out of water? How many blocks of polluted water will rest on the top of the tower before the poisons bring the whole thing down?

With the introduction of any any developmental tools and frameworks, there are questions which are rarely asked. Why do we need this development? Could we use existing infrastructure to achieve the same ends? What are the long term and cumulative costs of taking yet another block of life sustaining land and turning it into a concrete jungle? Will this action (alone or in tandem) cause the tower to topple over? What is the limit to growth?

If we continue incremental development of our farmland and destruction of our forests, if we slowly put more and more toxins into our environment and bodies, it will only be a matter of time before we take one block too many out from the foundation of our life systems and the whole tower collapses.

Our earth, our home, our basis for survival should not be treated as if it is a game; we only get one chance at this. Once stability is lost we can not just reset the tower. We can, however, work to keep the pieces at the bottom and start to change the ones we have already moved to the top to use them more efficiently.