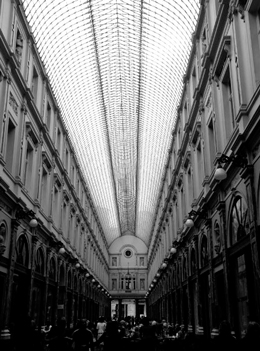 I’ve lately been griping as a way of building up enough enthusiasm to feel strongly about something. I think this is a common process; it’s probably more affirming to the human condition in a way to feel unhappy about something than complete disinterest or apathy. This has fed into my reflections on how most people I know talk about money. In the past few years, I’ve noticed a trend of people with relatively comfortable lifestyles complaining about ‘being broke’.

Being money conscious is certainly a valid concern, particularly with the slew of financial demands of student life. It still strikes me that most of the people I tend hear voicing financial complaints are not those who really have the most cause to be. Most of the people I’ve known who are under financial duress never seem to bring the subject of money up, whereas those who have substantially less cause to (being, despite the aforementioned monetary tolls of student life, still far from being literally unable to afford the standard of life generally associated with university students) are the ones who are more likely to voice complaints on the subject.

I should clarify that I’m writing this subject as somebody who is fortunate enough to have never really had to worry about money, and who has interacted with both those in far better and worse financial standings than myself. While I do attempt to spend responsibly and budget my expenses, I like to think that I’m relatively conscious of my financial situation. I make an attempt to not complain about overstating my case by claiming I “have no money”, when I know there are those around whom genuinely don’t. I have found it interesting to see many people in financial situations nearly as sturdy as mine complaining about “being broke”, despite having far less cause for concern than others.

So why would that be? Is it for the sake of trying to breed some universal cultural trope, that everyone can bond through feeling short on money, regardless of financial status?

That seems silly. Is it a form of displaced anxiety about feeling too comfortable, and attempting to play up their own suffering to seem more hard done by? Certainly more possible than many would care to admit, but I ultimately think this is only partially the case.

For however prominent a society component it is, I feel that money remains a very abstract concept. It runs on the most basic causality – you trade, labour or goods, for another goods, fundamentally useless unto itself, which is subsequently traded for goods essential for survival or otherwise pleasing – but only has consequences in dire extremes. The term “broke” is frequently used as hyperbole, overlooking the fact that money is not so abstract when people can literally not afford their shelter, food, or health.

The opposite end of the spectrum is very different – when watching the film The Social Network, I was struck by how fundamentally odd our world is where a twenty-something can be ‘worth’ billions of dollars, most of which he will never actually physically see. That kind of money is essentially imaginary until it is made tangible – mansions, cars, cruises and so forth. The consequences may be real, but it’s the middle ground transaction of money that remains an elusive, seemingly ‘unreal’ concept. Furthermore, if people thought using a card to carry ‘imaginary’ money was weird, how weird is the idea of all of our money being transmitted electronically, with no corporeal form whatsoever? It almost makes you wish we could switch back to pieces of eight again.

This is the point I’m trying to drive at: not only is money something basically everyone has some stake in, but it’s also, as far as most of us not in dire financial need are concerned, barely ‘real’. Until its cause yields an effect, money is effectively a concept more than a ‘thing’. It should be no surprise that when those responsible for making sense of the whole complicated mess run into difficulties, money becomes real again amidst talk of ‘recession’ or ‘depression’. If we were being observed from outer space, our watchers would assume that our social interactions and measures of power were determined by extensive games of make belief.

I believe this is why complaints about money come from those who shouldn’t necessarily be making them as much. It’s justified to feel anxious about our lives and social infrastructures being determined by an elusive, intangible construct. If some incredibly capable psychic were to erase the idea of money from everyone’s heads, in a purely physical sense, not all that much would change. We’d still have (or not have) as much stuff as we already do, but our ways of measuring our sense of self and making sense of our surroundings would be rendered null and void.

It’s this disturbing idea that prompts people to talk about money, even if it’s not necessarily fully justified: for the purpose of mutually reassuring each other of its existence, and the order and roles it governs, thereby validating our investment into the idea of it.

Though there’s nothing inherently wrong with this, it’s more important to devote such anxieties towards positive rather than negative reactions. For those with relatively secure financial situations, be conscious of those who are actually not, and either be thankful for being better off or devote energy into various ways of helping them. I don’t want to digress into some kind of “you’re richer than you think” diatribe, but rather suggest that being conscious of money and your relation with it will help guide your interactions with ‘the system’ and maximize fulfillment of life within it.