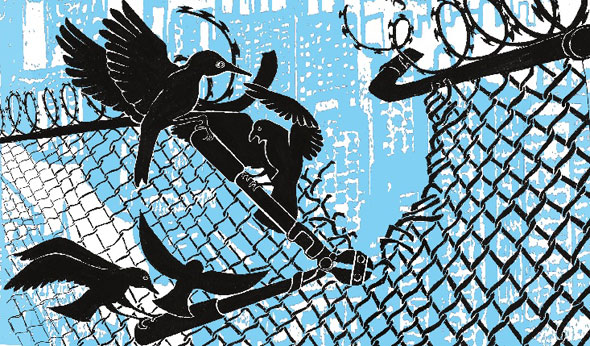 The time is coming in which we will need to begin to seriously consider enhancing efforts of resistance to systemic injustices that are rooted within society. The time has come to ‘attack the roots’ of capitalism and the ills that it brings and reinforces throughout society. It is time to consider community-supported forms of struggle and resistance against the very system that has, for too long now, been predicated on oppression and injustice so a few may benefit. This is the time to resist.

From June 25-27th, 2010 the leaders of the largest nations of the world will meet for the G8 and G20 meetings, in Huntsville and Toronto respectively. These are the very nations that continue to push the destruction of capitalism onto others throughout the world and in their own countries. These are meetings that have no participation by broader society. We, as citizens, are fundamentally stripped of any say about what goes on in these meetings. They are fundamentally undemocratic in this sense. Are we prepared to let the leaders that perpetrate wars against other nations, create police state conditions in our own countries, have an allegiance to financial capital and not human concerns, that fundamentally have interests that oppose those of society, are we prepared to let them dictate how the world will be run? The answer is a resounding no! The time is now for resistance to the global cult of leaders who structure policies around “capitalist progress” and not the needs of society. It is time to ‘attack the roots’.

Beginning on June 18th, with a People’s Summit, followed by Days of Resistance from the 21st – 24th and finally ending with the June 25th-27th Days of Action, there is a resistance movement building towards opposing the G8/G20. This is a movement that allows space for all forms of resistance, one that incorporates a diversity of tactics. There is no one mode of resistance so all forms must be accommodated if we are to build a strong movement. The forces of power will throw all they can at us to diminish our efforts of opposition. We need to be willing to do what is necessary to foster resistance against the current system so we can begin to imagine a better world.

This also means that we need to foster a sense of solidarity between different types of actors (and avoid the condemnations and infighting in the media that occurred after the Heart Attack Black Bloc Action against the Olympics in Vancouver). Solidarity should be our bond, what brings us together as a movement and what unites us against the forces of oppression and repression. If we begin to break apart and use the media (which is rarely on our side and cannot be counted as such) to condemn our allies, then our effectiveness will be diminished. We cannot be susceptible to infighting that divides us and turns different groups against one another. We all have a dream: a better world. We need to do what is necessary, in our own ways—ways in which we feel comfortable and empowered—to realize such a reality. Some of that dream means organizing within our communities on different projects (such as the Kitchener-Waterloo Community Centre for Social Justice in Kitchener). Another part is taking direct action against the forces of injustice when they come into our communities, just as they are doing in Huntsville and Toronto. Their presence means that we need to act. To show resistance. To show that we are willing to take a stand. To show that they are not free to simply orchestrate the world as they see fit. To show that we are growing.

The G8 and G20 are coming. We may not be able to shut them down as in Seattle in 1999 with the WTO, but we will be there to resist. And we must, if we want to begin to imagine another world. We must take a stand and fight back against the forces of oppression and injustice. We must stand in solidarity against those forces. We must engage in a variety of ways, taking different actions, but unified as a movement. We must ‘Attack the Roots”! The time is now: RESIST.