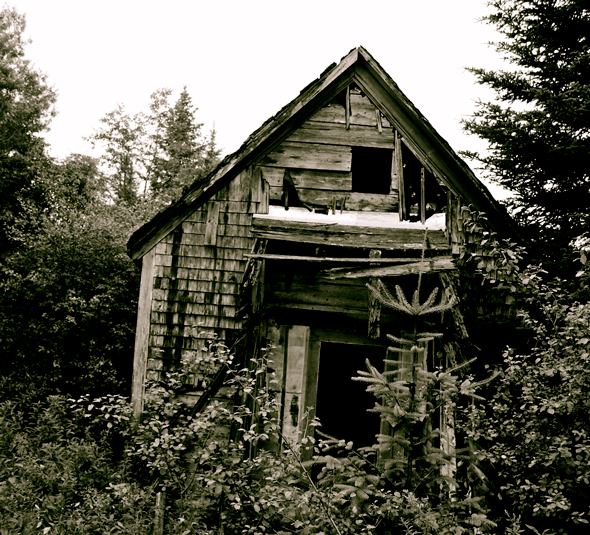 John Broker was a farmer. I am writing a short story about death, and these are all the words I’ve got.

John Broker was a farmer.

I sit here wondering what kind of farmer John Broker was. Livestock? Crops? Was he a good man? Yes, he was a good man. Well, he certainly felt he was. The people of the village respected him. His wife loved him. His son, however, did not.

In my mind John Broker, whoever he may be, is tall and muscular. His hair is both blonde and brown, and hangs down just past his earlobes in a stringy mess. He has a beard, which is just brown, and not very long. When he smiles his cheeks lift on his face like two plump cherries. His eyes sparkle behind thick bushy eyebrows. His shirt is red and plaid, made of fleece, and the top three buttons aren’t done up, revealing a hairy chest beneath. His jeans are dirty and ripped, having worked alongside him on several occasions. In his right hand he holds an axe over his shoulder. Behind him are pine trees, which is what he smells like.

I wrote that above paragraph in present tense, then changed it to past tense, and then brought it back to present tense again. This is for a few reasons; one being that past tense is supposedly easier to read. However, to me, John Broker is alive. John Broker, who is just an image of a farmer, (and a stereotypical one at that) is alive in my mind, and is therefore in the present tense. Not the past tense.

To write John Broker in the past tense would mean that he is not alive… at least not to me. That is something I find very sad. I don’t want John Broker to die. He’s smiling in this image. He is truly happy. He has just come out of a long, hard day of work, sweating and tired, and yet, he feels like he has accomplished something.

Unfortunately, John Broker doesn’t know what Michael Broker has done. Michael Broker was a skinny boy, though not at all scrawny. His pale flesh was smothered in the kisses of light brown freckles that danced mostly across his arms and beneath his eyes. He had beautiful eyes, deep things you could drown in. His hair was black, though neither of his parents possessed this physical trait, (his mother being a dirty blonde). Michael Broker had gone into the barn, tied a rope around his neck, and had hung himself. Michael Broker was John’s son.

He left a suicide note, explaining his shame and guilt. Another name could be added to the heartbreakingly long list of gay teen suicides.

His father will be in such anguish that he will swear and curse at the outraged villagers he once called friends. He will mourn the loss of his only son for years, crying in public, breaking down every masculine shield he’ll think he should have.

Now the image I have of John Broker has changed, and I feel, to the sacred memory of this farmer, that it is my job to re-describe him to you. He still wears those same clothes, still has that same appearance, though perhaps more worn. His beard is gone. I don’t know why. His coarse hands are at his face and he is sobbing uncontrollably. He is in a bar, we can’t see anyone else, but we can feel their stares. All we can see is a lit fireplace behind him, making oranges and yellows dance across the wooden walls. Why do I say we? Because John Broker and I are both experiencing this. This is agonizing pain. We loved Michael. I never even got to meet him, yet that weird dull throb has filled the back of my throat and I feel like my eyes are constricting.

This is a weird thing, a writer being so honest with his readers. I should be writing so that you see only John Broker and none of me at all. But I want to break the rules. I want to make a connection that no other form of writing has the guts or honesty to form.

John doesn’t know who to blame. Does he blame himself, could he have done something, had he not done something? Or perhaps it is his wife at fault, having done too much? The blame could lie on homosexuals, is it possible they persuaded Michael to join them, to become one of them? Even though not a single homosexual had been seen in the village for several years, since before Michael was even born? Or, was there someone else, or something else, at fault?

We all face, we all see, we all know of different and important issues in this world.

John Broker was a farmer.

John Broker is not alive.