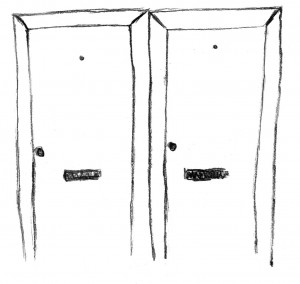 Illustration by Allie Hincks
The first piece I ever wrote for Blueprint was about being the daughter of Peruvian parents and my rich exposure to South American culture. In an attempt to come full circle, I want to write about my parents one more time.

My mother and father danced to disco and ate pancakes as they got to know each other, igniting a solid friendship that would later blossom into a forever-love. Prior to their meeting, their lives had taken very different paths. My mother had an instinctual passion for travel and tourism, and my father was a Chemistry major with a knack for numbers, metals, and experimental medleys. She started off as a customer service agent for a European airline, while his job was to physically assist in the construction of airplanes. My mother ended up leaving her job at the airport in exchange for devoted motherhood, and my father got a job at a car-manufacturing company. However, they both talk fondly of their time spent with flying machines, whether it’s about the journey and destination, or the buzzing sounds the airplane makes when it’s about to ride off into the pale blue sky. They are connected through flight.

As a girl I used to fear that buzz, trembling as the body of the aircraft violently shook to wake itself up, two celestial forms unified in motion. Overcome with anxiety, it was easy to concentrate on my accelerated heartbeat, but I was guaranteed to be challenged every time. I looked over to my father sitting next to me, as I struggled through my immobilizing dread, and witnessed his peace, ease, and delight. It felt like a sharp force interrupting my worry, my commitment to remain frightened, and in the moment that I was confronted with his excitement about our ascent I felt secure. I found safety and assurance. Watching my father eagerly look out of his plane window, absorbed by natural interest, I understood wonder.

Whenever I fly anywhere, my parents wait for my plane to embark by driving to a special location where they get front-row seats to the show, enjoying the remarkable take-off and blessing my voyage. Since my mother was actively responsible for the flight’s passengers, I like to think of her position as one defined by genuine care, and I think of my father’s as creator and puzzle piece. His fascination with airplanes makes clear to me his unchanged, child-like admiration for them, and the tender affection with which he beholds his passions. I know the light in his eyes as a boy has persisted. My mother’s relentless dedication to the care of travelers has enabled me to better value service-oriented work and the importance of being a kind resource.

It’s been 20 years since my mother has worked in the field of travel, a departure she expected to be permanent, a colorful past. She is currently in training to become a flight attendant, and she’s half-way done, and the pressure is thick, and she will succeed. My mother is a protector. My father is helping her every step of the way. Together, they are invincibly free to fly. I am proud of her experiences and the future emerging from them, and I am proud of my father for teaching me that the past moves.