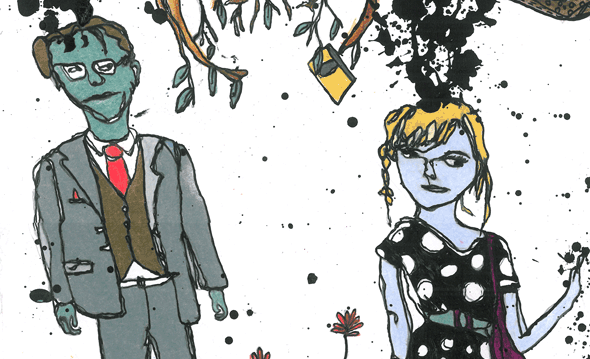 I hated Laurier the moment I set foot on campus. It was too small, modern and ugly and I couldn’t be bothered to socialize amongst sorority and fraternity kids because I thought that was all this place was made up of. It was populated with over tanned girls carrying oversized Aritzia brand TNA bags, pashminas, UGGs, and they outnumbered the guys approximately seven to one.

That was about four years ago. As a jaded seventeen year-old who had recently trimmed out the familiarity of high school, be it academics or friends, I was expecting something more than what I was presented with. I was expecting the trivial, juvenile antics that would come with supposed independence but to that end something else was missing; it suddenly seemed like I made a mistake.. I had the opportunity of a scholarship at Carleton and the prospect of being a journalist right out of the gate; I picked Laurier so my finances would be less cumbersome.

To be fair, my first impressions of Laurier came from my sister and the first day of O-Week. My sister, who was in her last year as I entered my first, was in a sorority and mingled about in clubs. She was always moving to her own beat, which I had assumed was aligned and meshed with the beat of Laurier. I have never been a club person. This school is incredibly volunteer-focused and I am, at times, mostly selfish. But her experience, give or take, was what I assumed I should have when I went to school there. Add in the barriers associated with living off-campus, and from there I could mould my typical university experience. Except, come O-Week, I was hit with the harsh reality that I didn’t do or want the typical experiences everyone else had. I didn’t cheer or live on residence or want to sneak booze with a bunch of people I didn’t know. But, as outlined in our issue of The Cord for surviving university life, these were some of the things that one should check off their list.

It took me two painful years to finally find my niche in this school. Academically, I was floundering when I had expected to be a superstar. My social circle was limited to the people I met in class or the few who didn’t live on residence as well; even then, the people you meet in class aren’t always expected to be lifelong companions. I, however, lucked out. A few classes into Sociology 101 with Dr. Luccisano in BA102, I found the first person to change my opinion of Laurier, the institution. I sat down, saw a girl wearing a Strokes t-shirt and said how awesome it was. She commented on my owl necklace and I so boldly made my first great friend at school. To this day, we’re still pretty awesome friends.

I’ll skip to the end: fourth year. The last two years of university suddenly became hyper important to me. I participated in class, obtained higher and more awesome grades, and developed a circle of friends that I have come to adore. I threw myself into a Laurier world that I hadn’t even thought existed. My studies during the day became my focus; my nights out with newly developed and different crews were what I looked forward to most.

In the end, I don’t suppose I truly hated Laurier because if it were that unbearable, I would have left. The institution wasn’t the problem. I began to dislike the way in which your university experiences were lined up for you, ready to be chosen, and checked off some list. I threw out the lists the Cord put out in the features section, knowing that the ninety-nine things one should do in university (including sleeping with a TA) were not the things I wanted to do.

My advice to my seventeen year-old self, and any other self that isn’t me, is that this place holds so many wonders, more than one could ever imagine. I graduated in June, and am probably a little nostalgic for the past four years that ultimately became a blip on my radar from how fast they went by. Regretting the idle time I spent the first two years is futile, but reflecting on how one sees a fulfilled experience in university versus one that isn’t is more productive. To follow the checklist isn’t a crime and the choice to tick off the things which appear on that list to make what you want your university life to be like is cool too. To not follow the features section is perfectly valid as well.

I want to tell you that I still harbour a disdain toward people who roll out of bed only to gussy themselves up for class to just look like they rolled out that way, but I don’t. In the end, the things I saw, laughed at, performed for or did is what made the impact. But here is to you, first year someone picking up this marvellous publication: follow the checklist or not, this school is amazing and, not to sound too much like a mushy alumnae, will hold some of the greatest memories of your life.