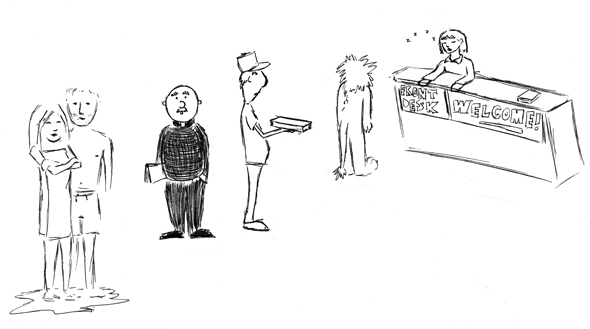 Being a creature of the night is a peculiar thing. One must be resilient and resistant in overcoming the body’s relentless and necessary desire to sleep, and one must be fearless, alone in the dark. This is the sinister time, the witching hour. To survive nocturnally requires vigilance. Night belongs to the strange, and if you consider yourself normal, you need to adapt or you won’t make it through.

People’s most shining acts of strangeness are reserved for the midnight to 5 a.m. slot. I know this because for the last year of my undergraduate degree, I stayed awake while the rest of the people in my time zone slept. I worked the front desk at a hotel and agreed to become the unofficial night shift girl. As someone who despises the concept of alarm clocks and rarely eats breakfast without a predeceasing hangover, it didn’t sound too bad. Every guest at the hotel being asleep meant solitude and quiet for me, and an extra fifty cents per hour on my pay cheque; as if being able to escape the general public weren’t bonus enough.

And so I clocked in at 9 p.m. and out at 5 a.m. Staying up all night isn’t exactly ideal, but it was the only way I could keep a job whilst simultaneously being a student, a writer, and an intern. More often than not, my nights would be spent doing homework or reading, interrupted only to deliver the occasional towel or corkscrew to a guest. But this job was not without adventure. Like I said, weird things happen at night. But weird experiences translate into sources of wisdom. Here are five of them:

If you let people sneak into the pool after it closes at 11 p.m., they will have sex in it.

I’ve got empathy for nomads. For a long time, I felt like one, so when two travelers from Germany stumbled up to the front desk after hitchhiking from Montreal and seemed disappointed that the pool had been closed for hours, I understood their dismay and let them swim. The lighting system in the pool area would automatically turn the lights off fifteen minutes after the pool was closed and locked for the night, so I told them that as long as they were okay with swimming in the dark and didn’t leave their towels behind, they could go in. I probably should have taken note of the up-to-no-good glances they exchanged when I told them the lights were out, because not ten minutes later did I see them fully immersed in the throes of passion on the security monitor. Nighttime is for having sex. Sometimes in public.

The one time you decide to take a nap in your boss’ office will be the one and only time a delinquent teenager pulls the fire alarm and the hotel has to be evacuated.

It’s the classic ‘security guard sleeping with his feet on the switchboard’ scenario: it’s been a long day. You put your feet up on the desk. You haven’t seen another human being in hours and you know with absolute certainty that your boss is fast asleep in his very warm, very comfortable bed an hour away. In my case, I hadn’t slept in two days because I was a writer/student/editor in addition to being a front desk warrior, and I feared insanity was one sunrise away. I swore I’d never do it; napping at work was so Homer Simpson, and I was more of the Daria type who preferred to endure the agony and be cynical about it later.

There had been no one in the lobby for hours, but sure enough, I awoke to the shrieking shrill of the fire alarm blaring not only in the lobby, but also in every single one of the hotel’s two hundred suites. By the time I got lucid and remembered where I was, guests had begun exiting in fear of a late night blaze and the fire department was on its way. As it turns out, the perpetrator, aged 16, was in town for his brother’s hockey tournament, had looked around the corner when he couldn’t find anyone at the front desk for vending machine change, and pulled the alarm to entertain himself. While the fire department disabled the alarm that sent me, this hellion and every other guest in the hotel out into the parking lot to wait in the cold night, we locked eyes and made a pact. If he kept quiet about my nap, I’d skip telling the fire department that there was a surveillance camera directly above every fire alarm.

If a guest locks their new husband out of his hotel room, it is the front desk girl who has to deal with it. (And it’s weirder if they’re wearing a lion costume.)

I’ve seen a lot of weddings. I come from a big Italian family, so someone is always getting engaged and the majority of my friends apparently took an oath that mandated them to get married before they turned 25. I like weddings, I really do. I like seeing little kids in tuxedos because I think they’re really cute. Bad speeches are funny. Intoxicated grandparents: even funnier.

Of all the newlyweds I watched parade through the hotel, though, there is one couple forever etched into my mind: the ones who got married on Halloween, in head to toe zoo animal costumes. Lions, to be precise. The bridesmaids: giraffes. The groomsmen: gorillas. The flower girl was dressed up as a zebra and earlier that day I spotted a four-year-old boy dressed as a frog who I now suspect was also part of these nuptials.

Perhaps it was the lack of oxygen inside the lion masks or the inevitable itch that comes with a rented mane headpiece, but the newlywed lions came roaring, literally, through the lobby in a screaming match that rivaled any actual survival-in-the-jungle footage The Discovery Channel has ever seen. The wife – the lioness – accused the lion of hitting on one of the giraffes, and the animal kingdom was subsequently up in arms. The lion was locked out of his room without his wallet, keys or dignity, left to make small talk with the front desk girl (me) until the lioness let him back in.

Have you ever had a guy in a lion costume ask you what the weather’s supposed to be like the next day when it’s 3 a.m. and his new wife just locked him out of their honeymoon suite? It’s a new level of awkward.

Sometimes you have to save your sanity by swapping the smooth jazz in the lobby for the mix tape you brought from home, but as soon as that Moldy Peaches song comes on, a convention of Catholic priests will arrive.

Upon occasion, situations will arise in which you find yourself stranded in a city you’ve never been to before. Maybe your car broke down, maybe you got lost. It happens, setbacks are a fact of life. As the night shift girl, you come to expect these kinds of surprises, few and far between as they may be. The hours between 2 and 4 a.m. are usually extra desolate though, especially on weeknights. This is the best time to avoid a systematic meltdown and put your own tape into the tape player that controls the music that plays throughout the hotel.

Having lost my mix tape making rhythm in exchange for getting really good at my iPod, I forgot to pause the CD I was taping off of when I made that week’s batch of sanity tapes, resulting in a particularly vulgar song by The Moldy Peaches accidentally ending up on the mix. Never before had my desperation jams been discovered, and I thought I was safe in my assumption that no one ever shows up to the front desk during the hours that I put my own music on anyway. Oh, how wrong I was.

Before I could scurry to the back room and rip the tape from the tape player/pray for my soul, the hotel doors flung open and ten priests in full Chastibule were cringing over the foul sexual euphemisms that were blaring through the speakers. They had gotten lost on their way home from a mass in a nearby town that they were visiting and reluctantly checked in despite being subjected to my sinful taste in music. Previous to this, I thought catching two people having sex in the pool would be the most embarrassing thing that would ever happen to me at work. I was mistaken.

If you’re nice to the pizza delivery guy, he’ll bring you coffee and cigarettes in the middle of the night.

Much like a prisoner in a jail, a front desk agent who works the night shift is stuck in one place for the whole night, unable to communicate with the outside world and spends their time fantasizing about the hedonistic pleasures that will become available to them once they escape – or, once their shift ends. The only connection to the world outside the front desk comes from those who can freely move about it: paying guests and food delivery people.

It would be inappropriate to request that a guest swing by a convenience store to procure cigarettes for you, so the pizza guy will become your best friend based on one simple flow of logic. Inevitably, guests will get drunk. Drunk people like pizza, and because they don’t know the area, will ask for the phone numbers of late night pizza delivery places. All you need to do is give out the same phone number twice and voila – it’s like your own personal cigarettes and coffee delivery service.

The first time you see your pizza delivery guy compadre, you give him your order. When he returns with pizza for guest number two, you can receive said contraband. Everyone wins, and you’ll really appreciate those cigarettes should you find yourself talking to a guy in a lion costume.