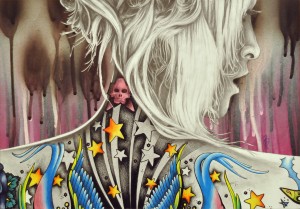 Sometimes in the summer it would get so hot that I would leave my room and climb the stairs to the roof. It was beautiful those nights, when the air was thick and warm, and I had the stars and the lights of the summer houses for company. Those in the apartments below would string lines of Chinese lanterns between their balconies, and the scent of wax and chiffon and roses would waft up to me and across the water. I would hum to myself and compose lines of poetry in my head and revel in the heavy atmosphere of possibility and newfound freedom. Those were the summer days, a time when anything was possible and eternal optimism unconscious. We were all intoxicated by it. Unlike some, I think I was at least partially aware that I was living out- a time in my life which I would remember fondly, and which I would never again reproduce. It was not the summer of love which had passed so many years earlier, but I think it might have been such a thing to me. It passed as unnoticed by Bill and the girls and I as it had for those who came before us.

We lived then in a little town on a lake, and with the kind of happiness which can only come by accident when one is unaware of it, and the kind of town which people only drive through on their way to somewhere else, and it was ours, and it was mine especially.

I knew a girl then, though I cannot remember her name now, and I used to take her to the island dances on weekends. I would row across the lake in the choppy scuttle I borrowed from Bill; it was a tub of a boat, all oars and holes. She would laugh as she bailed water while we crossed and I would chop at the waves like a cricket skimming its wings between hops in a field. We would dance and laugh and drink and sing, beneath the stars and the lanterns which I would look out on when I got home.

Sometimes she would come to the roof with me, and I might tell her I loved her if I liked, and she would smile and say it back, and these were the best times when I would fall asleep cradling a girl and a bottle of whiskey.

I asked her to marry me once. I hadn’t really meant it but she took the question seriously before saying no. “You wouldn’t want me” she said, “and then I wouldn’t want you and then where would we be?” “But I would want you,” I replied. She only shook her head and said I wouldn’t after a while and so I gave it up, for there never was any winning with her if she’d decided something was done, and I hadn’t really wanted to anyway. I’d only wanted her to want to.

I remember one day when Bill and the girls and I had gone to the cliffs at the far side of the lake. Bill had shown off with the high rocks and she had jumped some of the smaller ones and was swimming below us. I didn’t feel like jumping much and so I hadn’t and was lying on the rock face smoking and reading. Bill’s girl came up to me. “She really likes you, you know,” she said. I said that I knew and liked her in return. “But no, I mean really,” she continued, “she cares more and you’re going to have to be careful of it.” I wasn’t sure what to say to that and said so. Seeking to avoid further conversation, I jumped from the cliff.

It seemed to me then that nothing could go wrong and wouldn’t. I didn’t worry much and time went on for a while as it had before. Days of contentment streamed by like rivers to the ocean, and it never occurred to me that they might be pulling me towards something bigger and more frightening than that which I already knew. For a while, however, the dances continued and so did the rooftops and the laying and sleeping and the laughing and drinking. It was on one such night – as I lay smoking with her head cradled in the crook of my arm, the cigarette pushed to the corner of my mouth to make way for the bottles neck, my mind wandering and wondering idly and remarking to itself that my arm had fallen asleep before the rest of me, but that surely the rest would soon follow – that she muttered in my ear. “What’s that?” I asked, paying little heed and sleepily struggling to reclaim the peaceful state of half-dreamt wakefulness I’d been maintaining. “You shouldn’t smoke near me,” she said “it’s bad for the baby.”

It was then that I’d asked her to marry me, and as I said before I hadn’t really wanted to but I was surprised and understood that people said such things in situations such as mine. Of course she said no. However, I suppose I was relieved for that and grateful and guilty of it too. She didn’t sleep with me on the rooftop that night, but we lay there a while and eventually I felt her leave my side and heard her go to the door. I didn’t say anything to stop her but I crawled to the ledge and saw her shadow flit across the courtyard by the lanterns below. I thought of calling to her but then thought better of it and so I didn’t.

I didn’t see her for some time after that, and then not until the next summer. She’d had a new boy with her and she’d lost some weight but otherwise looked much the same and looked happy and so we didn’t speak. I didn’t feel quite right in the town afterwards, which was strange because I’d been looking forward to going back to it, but I needed money for school anyway and there was no work there, so I moved on.
At times I wonder about her and how she is, and how my life might have been if she’d said yes and we’d kept it together. I try to remember her name but never seem to manage it, and I think that although that part is forgotten I will always remember that summer I spent with her and Bill and Bill’s girl, and the smoke and the sleeping and laughing, and the drinking and dancing and the chiffon and rose and wax. I will always remember that summer I spent in that little town on the lake, putting prose together in my head and laying with her on a rooftop, above the lanterns and under the stars.