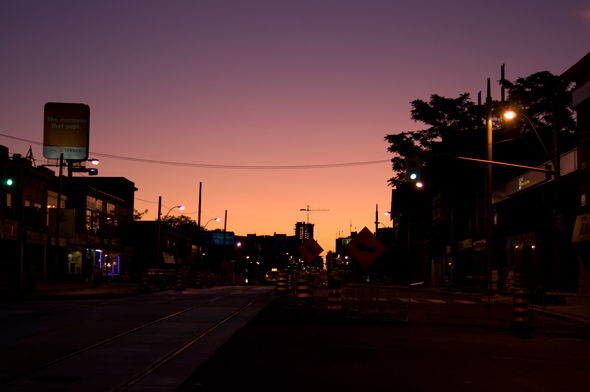 After a bottle of pre-drink Jaeger, a couple cups of sugar-free Red Bull, and the first couple drinks at the bar, I’m asked if I’m a gay boy. Honestly? I’m drunkety-drunk, I’ve had a long week of Laurier bullshit, assignments, classes with excessive and annoying student participation, and a lot of rainy weather. And I’m at Phil’s, where fucked-up goes to pass out. When I finally get out to Phil’s at the end of the week, don’t bug me about my sexual preferences.

For all I knew, this was a nice girl. She probably grew up in a small town, played soccer as a kid or something, enjoyed her schoolwork and sleeping in on weekends—she had that look about her. At any rate, this girl had nothing to do with me. She was mostly sober and seemed to be a bit naïve—asking a guy for black-and-white answers about his sex life at a dive bar. If I were that girl I would watch my back. She’ll ask the wrong guy one of these days.

Meanwhile, a protective posse of American Eagle-clad roommates put their hands on their hips, probably praying to God to look as tough as Kim Kardashian in support of their friend. I didn’t really care for a conversation with three mousy-haired first-years who had no reason to be at Phil’s on a Friday, so I got up and walked to the back towards the other bar. God, I love escaping to the back bar.

I still don’t understand why this group of girls needed to be up in my business. I know what you’re thinking: they were just looking for a funny gay boy to watch Grey’s Anatomy with and take to Toronto to shop. I was polite and did shit like that for a few years. I’m over it.

After getting kicked out for spilling a drink, I jumped in a cab and headed for Renaissance, Kitchener’s flop of a gay bar. This was usually a decision I’d frown upon; if you’ve been, you know why. I hadn’t gone in over a year and after I paid cover, I realized why. It was a hot mess of old exes, forty year olds offering to pay for drinks (a note to straight boys: a good way to get drunk if ever broke), people to whom I used to sell cleverly disguised baking powder to pay for new kicks, and a band of Kitchener lesbians. Memories of being eighteen with a fake ID.

Ren is a bit like partying in my unfinished basement; it’s small and unfortunate, but you can let it all out with no apologies, dance on the stage like you’re alone in your room, and jump up and down and try to break-dance for no reason. After all, you’re near the Kitchener bus terminal, surrounded by all types of people, and it’s hard to care about what they think of your dancing (or maybe that’s just the alcohol). In true diva fashion, I didn’t leave the stage until last call.

I met a girl named Kat with high heels that made her feet stand straight up. She was like me: dancing till her forehead sweat ruined her bangs, doing her own thing and not apologizing for it. She went out to the bar because she wanted to have a good time; she walked around like she owned the place, not waiting for or wanting anything. I ended up getting kicked out again, for a more legitimate reason this time. Some guy called me a bitch when I told him to get his hands off my waist and I ripped his shirt, no biggie. If you’re thin like me and ever have to rip a shirt, all you need is speed. A heavy bouncer in her forties (this is a Ren hallmark) chased me around in a circle for ten minutes. While I ran I turned my head and heckled her until another two bouncers came over and finally dragged me out.

It’s university, the time to be ‘who you are’ and define who you will be. Arrive. Even if they kick you out, arrive. Put on your favourites and dance. Never apologize.