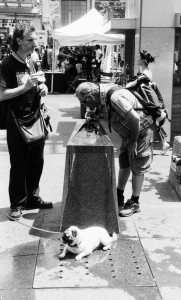 She looked at him with the mingling feelings of love and desire. It was their wedding day, and as she walked down the petal-strewn aisle she could not help but think how lucky she was. He had been the object of her thoughts for so long, and his face had the power to rapture her for hours as she observed every crease and wrinkle. He turned to her and smiled, warming her heart. It was after the ceremony that she looked forward to most of all; he scooped her up in his arms with little difficulty despite the ruffles of fabric cascading off her dress and pooling around her, and carried her through the door to their new home: their new life.

The screaming woke her up from her restless slumber on the living room sofa, screeching out from the baby monitor at her side. She slowly rose, pausing a second to allow feeling to enter her limbs. Before she could stand, the crying stopped, almost instantaneously. She heard him singing a soft lullaby to her, their baby girl. Then all noise ceased, and as she lay back on the sofa he entered the room, blue eyes aglow, whisking her into his arms and into the bedroom.

She watched the car pull out of the driveway, tears filling her eyes and brimming over. He rested his hand on her shoulder, and this was all it took to put her at ease. Yet the tears could not stop as they watched their not-so-baby girl disappear down the road, laden down with all things necessary for the perfect college experience. He was calm, and lifting her into his arms he carried her onto the front stoop and sat with her in his lap as she cried into his faded blue sweater.

The music began. One by one, the procession made their way to the front of the room. The cords began to swell, and she could almost feel them moving around her as she stood and turned to look; she had never seen anything so beautiful. Her daughter began to move down the aisle, the same look of love and desire emanating from her features as they did for her mother thirty years before. That desire never went away; it burned a hole in her heart that filled over the years with a feeling of complete contentedness. He took her hand and squeezed, and she knew they would never feel closer.