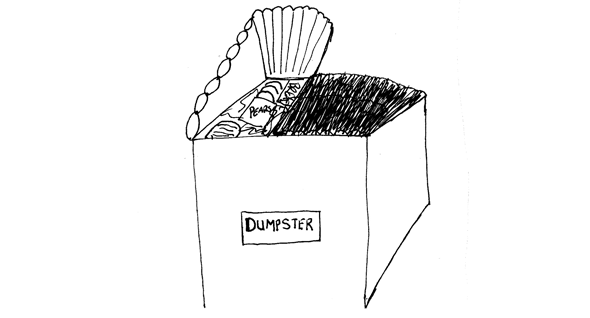 Food is such a basic thing, but it comes with a lot of baggage. The very simple habit of eating three meals a day is loaded with significance if we just stop our munching and think about it. When you consider what you actually know about your food, it’s not a lot at all. If you’re eating a pre-packaged meal, you have to wonder what exactly is in it, if those things that look like meatballs but taste like shit actually have any naturally occurring substances in them. The closest most processed food gets to real fruit, vegetables, or animals is through the picture on its box.

If you are trying to eat whole foods and making meals from scratch, you are then given the joyous task of trying to figure out where all those things come from. How were the migrant workers who picked your oranges treated? Did that chicken have its beak sawed off so that it wouldn’t peck the other chickens it was crammed in with? What poisons were sprayed on those red peppers to keep the bugs away, and when (not if) they seeped into the ground water, what happened to the people and animals living nearby? Your ex’s baggage looks like an easy puzzle to solve compared to that of food.

You almost have to wonder if it is worth it. Why bother asking questions when it is so convenient to just go with the flow? After all, for most of us living in the city, it’s not our water being poisoned. The feedlot cows standing in piles of their own shit never confront us. We don’t see the deforestation, the effect of runoff in river ecosystems, the algae blooms killing fish in the Gulf of Mexico because of excess fertilizer. We don’t have to hear the stories of the people who grow, pick, wash, and prepare our food. And we don’t suffer from the food shortages. Grocery stores are just a bus ride away. Hell, we could eat only 7-11 taquitos if we really wanted to. We are lucky enough to live in a country where food is something that we do not have to worry about. When was the last time you went hungry, and could not think of when that hunger would be relieved? I never have, and I bet you never will.

If you’re not going to ask those questions for the sake of your fellow humans in the world, ask them for yourself. Get greedy, and realize that better food makes you a better person. What you eat becomes who you are. Food doesn’t just pass through you to relieve that ache in your stomach; it is absorbed into your body and becomes you on a cellular level. Reading labels in the supermarket, I am confronted by words I cannot pronounce, let alone comprehend. Dicalcium phosphate, xanthan gum, azodicarbonamide. What are these additives? What are they made from, what are they doing in my food? And what are they doing to my body? On a fundamental level, our food becomes the physical suitcase for our consciousness. Whatever spark of life that makes us individuals is housed in a container made up of food. And given what we now know about the needed chemicals for early development, the food of someone else can also affect the person we will become.

Food is meant to nourish, body and soul. A microwave dinner eaten in front of a television does not satiate the human need for real food or relationships. There are no relationships there, either with the food, or with other people over the eating of it. Food is meant to be an act of enjoyment as a group, of community, of realizing the effect of your labours together to grow something or just to make it into a meal.

When you know your food, when you create it yourself, you get the chance to know who or what is benefiting or suffering for that. I recently talked to a man who organized farming families in Chile to process their avocados into oil, as a delicious and healthy substitute for any other cooking oil. He told me about visiting the farms and the conditions in the factory, and acted as an intermediary between this product and myself.

The grocery store cannot offer you this interaction, this assurance that the thing you are purchasing is not responsible for spraying toxic chemicals on workers and plants alike, or taking unfair advantage of destitute people by granting them the opportunity to work for insignificant wages in unsafe conditions, when their economies (often affected by callous international policies) cannot sustain them. Guilt isn’t a flavouring that I enjoy.

Food is political. Access to healthy and sustainable food should be a basic human right. I’m dreaming of a day when this food isn’t just a dream. When people don’t have the option between organic, fair trade, or the cheap knock-off brands. Because people will be forced by the knowledge of what we are doing to the planet to have our asparagus from New Zealand, our oranges from Spain, our year round lettuce flown in from far south. The planet, which has enough to feed us all if we just let it, cannot put up with this any more. I dream of a day when people have let go of their greed and realized that this planet cannot be bought, or if it is bought, it cannot be kept like that. When the cost, the true cost of treating people like dirt, and dirt like something worse comes out, and a 99 cent burger is no longer an option.