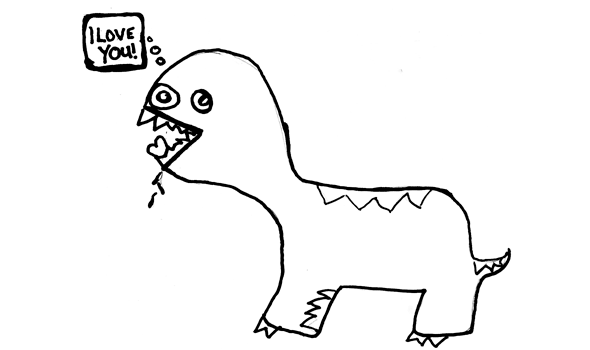 When I was a kid, I had a stuffed velociraptor in lieu of a teddy bear. I, like most other earnest little kids, had learned to displace a substantial amount of my affection, trust and hope into what was, speaking entirely pragmatically, only a collection of fabric and stuffing sewn together by a machine.

Of course dismissing it as such was one of the easiest ways to incur my rather fiery childhood rage, because to me, my velociraptor was so much more than a collection of fabric and stitches. It was to me a companion, a playmate, a trusted sounding board, something to hug when I was sad or scared, to jump around with when I was happy. In short, my stuffed creature was, to me, a friend. And I think it’s fair to say that I loved that little guy, as fearsome and frightening as it may have been to other kids. I always thought Calvin from Calvin and Hobbes had it entirely right—a stuffed animal was a true diehard companion, even if nobody else could see it.

By saying I loved a stuffed animal as a friend, I don’t mean to imply that my young mind was incapable of human empathy and I would really value my toy as equal to or more important than any of my human friends. My parents were clear to instill in me a solid balance between valuing my possessions without becoming too materialistic. Nonetheless, I maintain that I loved my velociraptor all the same, and I think that having the creature in my life accomplished a very important alternative outcome: teaching me to decentre my concept of love exclusively from people.

In our media saturated culture, people are more often than not far too prone to putting romantic, interpersonal love on a pedestal. I think the concept can be used in a far more expansive sense, and that our predication to focusing so exclusively on romantic love is really leading to us missing out a fair bit on what else our world has to offer. There have been many times when I, hiking in the mountains and coming across a sudden, unexpected, absolutely sumptuous and breathtaking view of a cliffside and a gulley underneath, or when seeing a tiny crab scrabbling over rocks with turquoise water lapping over it, or even just witnessing a devastatingly beautiful sunset over trees, have been moved by an emotion so powerful and present that I wouldn’t hesitate to refer to it as a kind of love. And I could give countless more examples. I in no way mean to devalue the fascinating intricacies in people in any way (far from it!), but merely suggest that our planet has more to offer, whether in terms of vast natural scenes or tiny little quirks, than interpersonal romance to love. It’s hard to believe that any of the famous poets whose words we now cherish as foundational cultural texts were not moved to the point of love for whatever inspiration, likely largely non-human, led to them assembling their words.

I know there is a widespread stigma against expressing love in general, elusive terms, like love for the earth or love for people, leading people to be apprehensive to do so for fear of being branded ‘crazy’ or ‘spaced out’. At the same time, I think it’s increasingly clear that dwelling entirely on romantic love as an outlet for any profoundly moving feelings not only runs the risk of people severely not appreciating the planet for what it is, but it could also very easily lead to our cultural concept of love getting pretty twisted out of shape. It’s a lot easier to feel disheartened with the world, I would imagine, if one’s entire capacity for love is linked to a relationship with a single person which might very well end up ending.

And trust me, I know full well the intoxicating and all-consuming euphoria and fervour romantic love can draw out in people, and I truly believe it to be one of the most precious and beautiful things the world has to offer. What I’m trying to say is that it shouldn’t be the only beautiful thing the world has to offer; if people can learn to decentre their love somewhat, whether by allowing themselves to love a thing, a stuffed animal, a pet, or a natural scene in addition to loving their families, friends, romantic partners and so on, I think we won’t run the risk of putting so much emphasis on the romantic love exclusively, which could very well lead to it burning out prematurely or being too devastating if it happens to end. So, if people could learn to be less afraid to use the word in any context apart from a relationship, it could not only lead to less stress and expectation put on their subsequent romantic encounters, but also lead to them appreciating and finding more nuance in everything around them. Sounds pretty good to me.