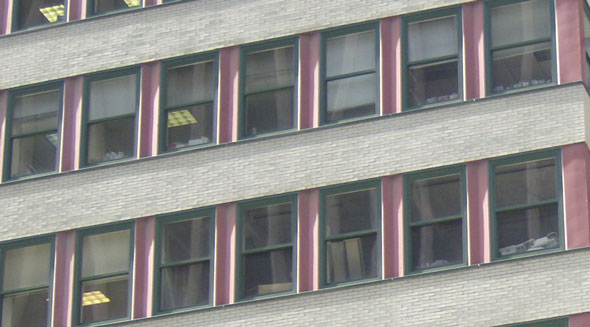 He shuts the driver’s side door of his 2010 Mercedes Benz e-class sedan with relative force and begins walking towards the trunk. The trunk pops open so promptly to the touch of a button that Roger Biglen imagines it somehow anticipated the action. After all, to call his morning routine predictable would be an understatement. With briefcase in hand Roger gently lowers the trunk, lets gravity take its course, and begins to walk towards his building.

As he makes his way up the street in a slow but determined fashion he sees the young faces of a crowd ahead. Though not too large, the crowd seems to be a spry bunch: moving about and waving signs. In his middle-aged wisdom, Roger estimates the mass to be about 25 strong but knows that it will surely grow over the course of the day.

Now approaching the crowd, constituted largely of what he would consider ‘kids’, Roger reads (almost aloud) the words on the closest sign: “A FEW PROSPER, MANY SUFFER”. Suffer underlined for added effect. The woman holding the sign glares at him and purposefully faces it in his direction.

Trying to withhold a scoff or a shake of the head, Roger enters his building and takes his all too familiar elevator ride to his office. A place that feels more like a hideaway now than a place of business.

After about an hour of mundane morning tasks, Roger buzzes his secretary, Brenda, for a cup of coffee. The buzz itself being enough to indicate what he desires. It is that time of day; no words need to be spoken.

Brenda was one of the finest people Roger had come to know. Her well-rounded personality typified by her ceaselessly beaming positive expressions. Despite her youthful spirit, Brenda was the only person in the office older than Roger (he always assumed around mid-sixties). Why Brenda had yet to retire he couldn’t say but suspected that she truly loved to be around the people in the office, or maybe just people in general.

As Brenda set the china cup of coffee in front of him, he smiled as if to thank her.

“Brenda”, Roger says rather hoarsely and clears his throat for the second word he’s said all morning, “Do you mind if I ask you a question?”

“Go ahead”, she answers in genuine tone.

“What do you think of these kids outside?” With an emphasis on kids as if it would in some way affect her answer.

“Well,” she pauses, “I can’t say I’ve really formed an opinion. Many of them seem nice enough. Their message certainly doesn’t come without reason. Although, I can’t say I agree with their fashion sense, that worn out attire is quite drab”.

Her comment about fashion seemed to camouflage the striking part of her answer for Roger. ‘Doesn’t come without reason’, lost in her lackadaisical observation of something as inconsequential as clothes.

“I’ve heard what many of them have to say”, Roger says, “and a few of them seem to be very articulate. But they’re all so young. They are barley old enough to understand the challenges of life and they have already decided to reject them. What happened to embracing challenges and overcoming obstacles? We are blessed to live in a country where success is so achievable and these kids want more. Want what? Life to give them their dreams on a platter? To give them a fat bank account so they can go spend their money on whatever the hell these people buy? I can’t imagine their prerogative.

His last word hangs in the air. The silence that has fallen on them seems slightly uncomfortable for Brenda.

“No, I can’t say that is what they want.” Brenda says in a kind of prolonged sigh, “Equality, Roger. These kids, they see the limitless power of the few and subsequently the corruption of the world.”

The words of the sign now burning in Roger’s mind.

“And they don’t think I see that?” His voice now booming with character, “They think I don’t see corruption? These kids, they have yet to be callused by the harshness and unforgiving nature of reality. Their minds are so sensitive that they actual react to such truths of unbalance. And to think that they can change the world with their wishy washy principles. Peace, love, community: they have swallowed these ideas like wine and are drunk off their promises!”

The poetry of his last sentence takes Brenda back a step. It seemed rehearsed.

“They are just concepts, Brenda, they don’t create anything, they just simply are. The system can’t be governed by such things”.

“But they offer hope”, Brenda rebuttals, somewhat to the surprise of Roger. “Thoughts of these things give us… something. They give us a reason to keep going.”

“But they don’t!” Roger insists, “Putting these theories into practice is a pipes dream. No one places the success of their neighbour over the success of themselves. The world is too hard for that! You have to fight tooth and nail to make it anywhere. I wasn’t born on third base, Brenda, I hit a triple and, although some would have you think otherwise, everyone has a chance at bat”.

Roger feels as though this baseball analogy may have fallen short of Brenda’s understanding but does nothing to clarify.

“But what do I know?” Roger continues, “I’m just the bad guy, sitting up here in my comfy office thinking of ways to screw the common man out of his hard earned money. The axis of evil, no doubt”.

Roger laughs lightly. His sarcasm does nothing for Brenda.

“You’re not, Roger, and that is the most frightening part of the world we live in. Even one lowly actor in this tragic play-of-a-system perpetuates the very worst of its attributes. Evil surrounds us like a fog that we cannot see, and the banality of it all is what keeps us blind. Isn’t that the most terrifying thing, Roger? Even with good intentions and motivations we, within the system, further inequality. These kids do not believe you to be evil, and if they do, they suffer from a greater ignorance than even the worst of the greedy and the powerful”.

He stares into her face and sees something he’s never seen in it before – a kind of intellectual glow. He has never talked to Brenda about politics or anything of that sort but supposes that he always new her heart lie slightly to the left.

“Wise words” he says with a tone that sounds sincere but that he knows is not.

“Oh, and before I forget, Brenda, could you take my lunch order?”