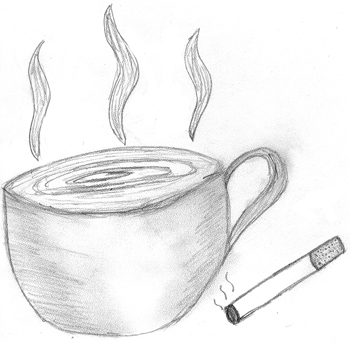 She was enjoying the whore’s breakfast: coffee and cigarettes. She had considered stealing a piece of bread from her roommate, but she wasn’t even that hungry. She was at peace just sitting there on the balcony, smoking and drinking coffee.

It was at that moment that she saw a beige-coloured, massive, and terrifying SUV pulling into the building’s parking lot. Terrifying, because it belonged to her landlord. She dove off the balcony into her apartment, dropping her cigarette and leaving a black burn on the carpet.

She crouched under the window and slowly moved upwards to peek out. The car door slammed and her landlord moved from the parking lot to the door to the apartment building. He entered.

She stood up and began to pace her living room. Maybe he’s here for a maintenance issue. Maybe it wasn’t him at all. She felt her heart beat fast and pains in her chest. The anxiety crippled her knees, making them feel so weak that she could barely pace anymore.

Maybe he hadn’t seen her. Leaping off the balcony wasn’t exactly inconspicuous, but maybe he hadn’t noticed. In the case that he hadn’t, she didn’t have to answer the door. If he had, she’d be a fool not to.

She couldn’t know whether he’d seen her or not. She had no choice.

She approached the door on wobbly legs and opened it.

“Oh hi Craig,” she said, staring up at his inexpressive face.

“Your rent didn’t go through again,” he replied gruffly.

“Which, this month’s?” she asked, playing dumb.

“Oh, well, that’s weird, because I thought I had the money,” she paused, contorting her face to look as though she had no idea how this could’ve happened. “Well, I guess I’ll have to call my parents. Maybe they didn’t transfer the money on time? I’m not totally sure. Can I call you after I get in touch with them?”

She feels the anxiety subside as he turns on his heel to walk down the hall. She still had to figure out how to get her hands on $500, but for now, she might as well get back to drinking coffee and smoking on the balcony. It was, after all, where she does her best thinking.