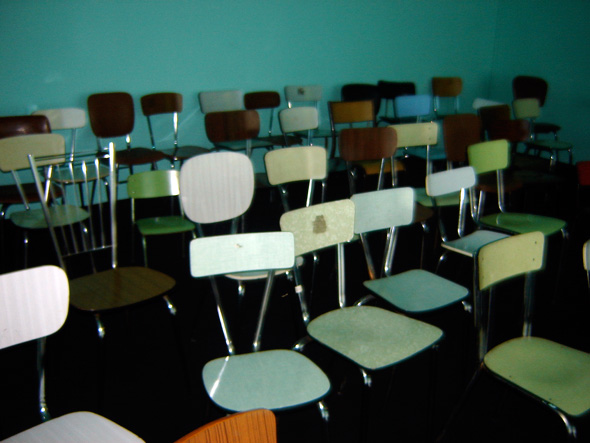 My friend will be here any minute now. I am packing up the small meal I’ve made for us, folding the napkins, tucking it all into my bag. I am thinking of a place I’d like to show him. Tap, tap, tap. That must be him at the door.

We go by bicycle. My friend leads until we reach the city’s limits; here I pull ahead. We have met the river now and ride along its side. Its soggy banks hang low and collapse into the water. There can be beauty in a vulnerability revealed, and these banks are the bare ankle of this river’s potential to change: they give away that what is now may not always be.

We lay our bikes down in the grass and sit on a bench that faces the river. My friend and I say very little, and generally between us there is not much to be said. He takes a bite of the sandwich I made for him. A herd of cows grazes on the opposite bank. We are nearing sundown now.

I am aware of the cows’ smell now too, along with the smell of the wet earth, and the fresh sweat on my friend. I reach into my bag to grab the two cans of beer I brought for us.

I met another river once, a great river that was also lined with cows but presented its body quite differently from this one. Its banks had been sculpted and set by the people, not left to respond to the wake like this. Its banks were paved, corseted, so that not an inch of room was left for the current to veer or expand; it appeared to be important that the great river remained just as it was. I stayed three days by that river.

My skin feels cool here this evening, but I can recall a hot sun that slowed me down while walking around that great river’s city, a city very strange to me. I had seen a man, sick beneath a white tarp, lying near the bank and returned to him a day later. Approaching his crumpled shape over twenty paces or so, I grew anxious as I saw that a breath no longer moved the tarp. And finally standing close to him, stunned, I saw that he was dead.

Of the many beings that loved the great river, the initial moment of this death mattered most to the flies that were humming over the exposed parts of flesh, smacking their lips obscenely. The dead man’s head arched back beside the rest of him and the little beasts crawled in and out of his gaping mouth, his hollow eyes and the place where his nose was supposed to be.

I could still see the body from where I sat down on a step nearby. Now missing the light of life, what did that body mean? Was this decaying heap of human just another object to dispose of? The people of this place insisted that no, there was something special about this emptied body and that before it is given to the river, it must undergo Ritual. Ritual is what crashes through the streets as clay pots are broken; flower parts scattered; there, a pungent stench; some powder, so bright; the silk is strewn; the feet, erect. Then comes the vital flame. Certainly it is captivating, but does it mean something? Oh, it is sacred, they said.

Wait a second! What is that? That, there! Floating just there! I am leaning forward on the bench, squinting a little, trying to make out what that form is passing in the river before us. It can’t be a body. No, no it’s not a body, just a large shrub, and an uprooted long-leaved plant. The way it’s floating there and swaying like a sprawled Ophelia corpse set off my imagination, I suppose. I can see there are still signs of green left in it, but with its meaty roots outstretched in plain view, it is beyond saving. There, an organic mess, another dying pile readying itself for the earth; is it really so different from the remains of a man? My friend lets out a sigh.

This evening, he and I listen to the river near us. Sometimes we are aware of the purring of cars on a highway not too far off. But I am having trouble staying here, inside my body beside my friend. My thoughts move like liquid, and in my mind I see things that are not here.

While sitting on that far away step, in that strange place by the great river, I spotted a very young child, just a baby really, weaving through the passing people. She danced over objects laid out on the ground, brushed against the sides of goats and women’s skirts. She teetered over the dead body resting there and came right up to me, gurgling. Leaning on my knee to fumble with the folds in my pants, she then surrounded my hand with her ten round, grubby fingers and tugged at my own. This little girl, the black of a crow’s coat smeared around her eyes, looked to my face and cooed. A dead body there behind her said everything she did not. I’m done my beer now.

In these last moments of today’s weak light, I look over my hands. They are calloused, creased and hardened, not the same soft hands that touched the fat fingers of a wandering baby. Surely a hundred years have passed since that day; certainly a great deal of space has been crossed. But I’m not quite sure what else makes up the difference between those hands and these.

There is a sharper coolness stirring now, about our calves and ankles but inching slowly upwards, and the bugs of this river are making their hunger known. This day has grown old and is turning. It’s time to head back now.