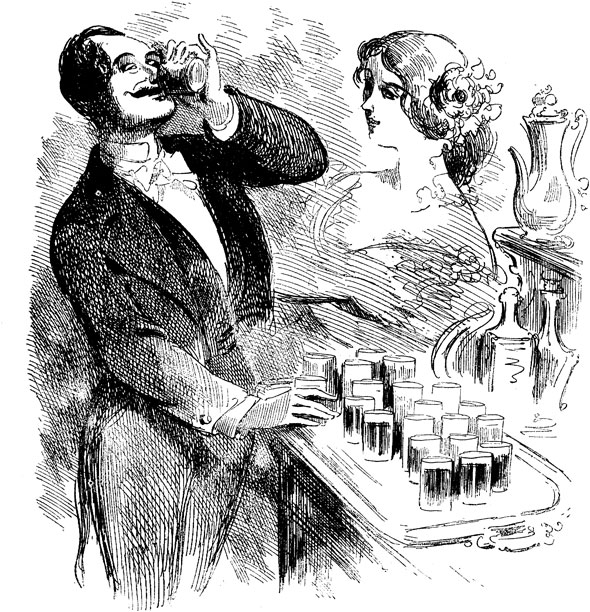 I lifted my eyes momentarily from the yawning entrance to the medicine bag and met his gleeful expression with what I hoped was a look of cool confidence and a low whistle of appreciation. Smiling as best I could, I rose from my crouch at his side and gave him room to dig around amongst tinkling vials and a dozen torn bags slowly leaking a hundred wonderful and terrible chemicals. “Nick,” I began haltingly, and coughed lamely to hide my nervousness. “My mind is your canvas, buddy. The weekend is young and so are we.”

One day and many strange introductions later I found myself sidled behind the bar of the saloon, scanning a crowd of near-strangers familiar only from the blur of last night for that face out of an old dream, straining my ears to catch that damned musical lilt of a giggle from somewhere before or behind me that always told me she was having more fun than I wished she was with another man.

And there it and she was, finally. Swaggering up to her and he as best I could, I quickly forced an arm between them to sweep hers up and around me in a warm embrace. Her pleasant surprise at my late arrival momentarily broke me an opening into her oh so busy schedule, and I took the opportunity to hand her the perfect going away present I had thought so long and hard over – a Hello Kitty valentine, crudely sharpied to compliment her ass. She took the card with a look of bewilderment that blossomed into generous laughter – for me, for once! – and fell, dragging me with her, onto a nearby couch.

Still giggling with delight, she quickly reached into her handbag for something and then gently curled my palm around a small vial, barely dusted with powder. “Meow,” she breathed, then clarified, “MeO5-DMT.” She smiled while motioning me to hold it to the light. “I’m sorry we never had a chance to do it together, but then, we never got to try the DMT, either.”

With that unmistakable laugh of self-satisfaction at her own poor joke she stood and sauntered for the door, pausing only to toss a smile and a wave over her shoulder as she continued out to first break camp for dawn and then to begin the long hitchhike to Mexico where she would meet up with that damned American lover – Darren? Darrell? Why the hell did I suddenly feel that I should have started to pay attention at some time before this point?

God only knew when – or if – I would see her again, or what I was about to see right now. I tipped the contents of the vial onto my tongue while my eyes remained fixed on her retreating figure as it slipped neatly through the crowd. The psychological rush of experiencing any new buzz began to set my senses aflame long before the chemicals could do whatever it was they would do – were doing? – and as I sat and waited for life’s next grand movement to unfold into memory ten thousand anxious and excited emotions roiled through my gut and spasmed in my mind.

She broke through the doorway of the saloon and jumped down the step, landing unsteadily but still heading into the crisp evening and out of my life. As my visual acuity began to sharply drain away and all became shape and colour beyond even my fondest attempt at recognition, the words of one of our playful teasing shouts of times past haunted my mind until I was safely ensconced in a haze beyond the reach of it, her, or me; lost in a memory, caught for now in a waking dream. So terrible of her to leave, so wonderful to watch her walk away.