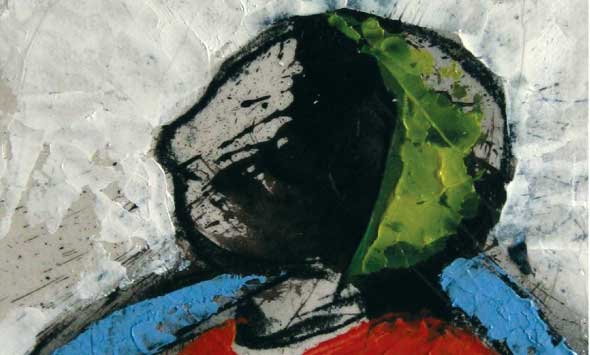 She has been in the womb for ten months. She has stopped growing, but kicks harder every day. She will grow up to resent her mother, thinking she was held in for the extra month as punishment. She likes it when her mother sings. Tonight, she will escape and never stay anywhere for long again. She is Lindbergh.

She was born with a birthmark in the shape of Gemini. She dislikes friendly strangers.

Her name is the colour of pomegranate. Someday, she will find out what it really means to have her fingers stained. She is Botticelli. She is Uffizi. She is Madonna of the Pomegranate.

She owns a bar off the main strip. She named it after her sister. A good smile makes her squint her eyes. She likes to use a new word every week. Until next week, she has never been in love. Tonight, the word is dubious. She is Mitzi. She is Edie. She is drunk.

She likes to peel dried white glue from the palm of her hand. She saves each one in plastic sandwich bags. She spends most nights in the bathtub, smoking and smiling. She is scared of water and likes the sound of winter. She is Ophelia.

She likes the sound of a man with a bass voice singing. She paints maps on her body. She means wild. She likes to paste Hollywood faces on her family photos. She doesn’t like to talk about her brother. She is Queen.

She likes new socks and the smell of baby foreheads. She means business. She likes real laughter. She also likes the smell of moss after rain and Thai food in the Fall. This week, she has fallen in love with the girl from the newsstand. She is a stranger. She is Anaïs Nin.

She uses drywall compound to fix everything. She cannot stand an unfinished crossword or when people play themselves at chess. She thinks the profile of her lover is muscle, is perfect. She is a bridge. She is Arthur Wynne.

She has never been on time once in her life. She dislikes people who chew loudly and talk with their mouths open. The word of the day is chance. She wants comedy. She wants Joan Cusack.

She has a collection of vaginas under her bed. She likes singing on fire escapes. She is a pervert. She is a sadist. She is the Marquis de Sade.

She likes listening to women cry in bathroom stalls. She loves gaps in teeth and burning in her throat. She hates it when people ash their cigarettes on the floor when there is an ashtray in front of them. She is Panang. She only burns Nag Champa incense. She destroys everything. She is Kali.

She has been a jilted lover. She loseWeight Exercises her temper when coffee spills into the saucer. She cries when she walks alone at night. She is a warrior. She is Aunty Entity. She runs Bartertown.

She likes the way cheesecake looks so fancy before it is eaten. She hates muzzles and raw shrimp. She has given herself 33 days to die. She will never have a son. She will bear witness to the greatest quest in history, finally completed. She is the Green Knight.

She has a speech impediment. She chews on toothpicks and never wears underwear. She likes her steak to bleed. She is Spasmodic Dysphonia.

She loves the sound of paper bags and boots in snow. She closes her eyes whenever her photo is taken. Her lover tango dances in dark alleys. She only likes to eat the burnt top of lasagna. The word of the day is splendid. She is Victorian Death Portraits.

Sometimes, she forgets how to laugh. She likes jalapeños, the staff in fast food restaurants and porch season. Ceiling fans give her anxiety. There is no Roland Freisler. God is not her judge. Everyone else is.

Some days, she is not compassionate. She tries to make jokes about her sadness. She has an independent eyebrow. She is an Elvis song.

She likes the look of hungry cats. She dislikes the smell of perm solution. She is horrified by the capabilities of her hands. She is from the sea. She is unrequited. She is the Lady of Shalott.

When she can’t think of the right words, she quotes other people. She tells epic sagas. She is Scandinavia. She is a liar.

She burned her mother’s house down when she was seventeen. She likes her lava lamp and hates flowers. She is an extremely jealous lover. The word of the day is ominous. She is Lavender. She is Rhododendron.

She loves faded lipstick on a glass, a cigarette, or a white collar. She dislikes citrus fruit. She cracks her knuckles and works with poisons. She is Antimony. She is a good spy.

She lives above a bakery. She once tried to kiss a 15-year-old girl in her kitchen. She loves window-shopping. She goes to confession to confess. She is Istighfar.

She loves a good cliché. When she sees steam rising from the sewer behind her building, she stands over it and watches herself die. She hates the feel of raw cotton. She is a 16th century poem. She is Thomas Wyatt.

She drinks gin and nothing else. Her hair is red. Her lover is dead. She hates the smell of cilantro. She was banished from Eden. She is Eden. She is baby. She walk on water. She want approval. She want mommy. She madman. She desperate. She Andromeda.

She could tell you how to get home. She also knows how to get into her house from the roof. She has seen God’s feet. She wears a chastity belt. No she doesn’t. She is 1492.

She indulges herself in secret. She likes stupid, unconditionally faithful dogs. She sleeps sitting up. She hates the word mutiny. Her lover won’t be discovered for three weeks. Her lover is Elizabeth Short.

The sound of duct tape gives her the creeps. She knows that rain gets rid of evidence. She wants to dance at the disco. She is always hungry. She has taken a vow of blindness. The word of the day is jubilation. She is former Aztec. She is Tlaloc.

She thinks everyone looks angry. She sometimes stares a little too long. She is Annapurna.

She likes people who are tone deaf. The word of the day is meticulous. Her body will not be discovered for three weeks. She will be Black Putrefaction. She will be Butyric Fermentation.

She Fortuna. She saw this coming.