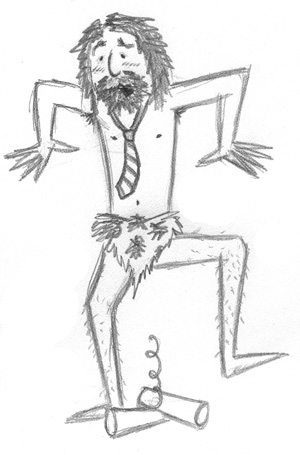 Academic Caveman #1: Did you notice that when lightning hits a tree it sometimes erupts in a bright hot light?
Academic Caveman #2: Yes, and the light spreads to all the other trees close by.
Academic Caveman #3: And it only stops when all the trees are gone.
1: Do you think the lightning is hot?
2: I don’t know, why?
1: Because the light is hot, so maybe the lightning makes the tree hot, and that makes the light.
3: And why does the light spread?
1: The trees are fuel for the light.
2: Lets call this light, fire, and when it spreads, let’s call that burning.
3: So you are saying that heat creates fire, and wood gives it fuel to keep burning?
1: Yes! Heat creates fire!
2: And fire makes more heat, as long as it has fuel!
1: Yes!
3: So to make fire we need heat and fuel.
2: But how to we make heat?
1: With wood, we rub two pieces together quickly and make it hot.
2: Eureka! I wonder what would happen if we started using fire to warm our caves and heat our food.
3: That’s not all. With fire we could chase away large animals. We could make a fire in the forest and drive our prey.
1: If we had fire, more of us would survive the winter.
2: We could be the most powerful animals on earth!

The academic cavemen continued to talk long into the night about the possibilities of their new discovery. For days they talked, theorized, and came up with more and more ideas of how fire could change their lives.

One day, it became very cold. The tribe experienced the worst winter they had ever seen. People were dying, and hunting was difficult. So the academic cavemen gathered together.

They continued to debate on the best way to make fire, until one of them finally stopped it.

3: We don’t want to waste energy trying to make a fire that doesn’t work.
1: I think we need to tell the tribe about our discovery. Maybe one of them will make a fire.

The academic cavemen left and returned to their meeting place.

1: The people don’t understand how much better life would be with fire!
2: Why don’t they see it?
3: They are just ignorant. They don’t want to see.
1: Then how do we make fire?
2: I guess we’ll have to make it.

They all looked at each other, each waiting for the other to try. Finally, the first caveman picked up two sticks and started rubbing them together, but his limbs were too cold, he couldn’t move fast enough. Eventually he gave up.

The second caveman tried. He got the sticks hot, but no flame came out.

The third caveman tried. He got a spark.

But it was too late. The spark was gone.

The academic cavemen discussed their dilemma and decided that once the flame started they had to work quickly to keep it going. They discussed exactly how they would do this. It took a long time, but eventually, after sitting cold and stiff for hours, they were ready to try again.

This time though, they could not even get a spark. They were too stiff from sitting so long in the bitter cold talking.

1: I can’t feel my fingers.
2: I don’t understand. We know everything there is to know about making fire. Why can’t we make it?
3: We came up with the idea, shouldn’t someone else be able to try it out? Why should we have to do everything?
2: But the people in the tribe don’t understand.

The academic cavemen kept talking until they were too cold to move. By the time they finally decided to just go back to the tribe, they had frozen to death. The secret of fire died with them and the human race remained small and insignificant; which, in retrospect, is a good thing.

Too bad academic cavemen didn’t run things back then. All their theories and discoveries would have remained happily in their little groups, to be discussed and debated for all eternity.