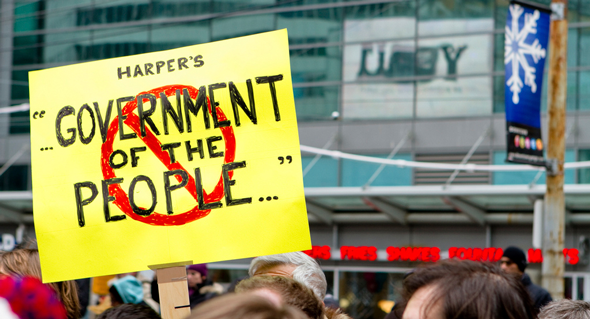 What does it mean to be a citizen of Canada? Or a citizen of the world? I think that to even approach an answer, we need to first ask what it means to be a non-citizen, a secondary citizen, or a so-called ‘undesirable’ citizen.

Canadians, particularly white Canadians, like to tell ourselves stories about what Canada means: we’re multicultural, a cultural mosaic, a land of immigrants. But rarely are these tropes investigated further. Who is multicultural, and what does that mean? What makes up our “mosaic”? And who is the kind of immigrant that becomes a “Canadian”? When we don’t interrogate what these statements mean, and who gets to make them, we allow ourselves to ignore the power dynamics at play when decisions are made regarding who is Canadian.

Thus, when people talk about multiculturalism, they talk about food, music, or clothing and accessories—cultural products that can be consumed, maintaining the status quo of consumerism, with a superficial nod to the celebration of difference. Is this the mosaic? A million unrelated cultural objects stuck together for people to buy? Multiculturalism has little to do with anti-oppression, fighting against racist policy and practice, or centering the experiences of new Canadian residents in social and cultural discourse.

So, who gets to be Canadian? There is an assumption within our collective mythology that says all Canadians are equal. We’re not. Those who are born here, especially if they are white, can live comfortably with the belief that the government is meant to work for them, and that it will be accountable to them. Particularly in the post-9/11 world of hyper-security and paranoia, it is dangerous to not be a citizen, especially if you are a person of colour. Those without the protection of citizen-status (or those for whom the colour of their skin allows others to call this status into question) run the risk of having taken from them “the right to have rights” as Dr. Jasmin Zine described in her lecture at this year’s Global Citizenship Conference. If security means racial profiling; arrests based on vague suspicion, not proof; and the risk of deportation for residents without citizenship, then in what capacity can we call ourselves a nation of immigrants? Moreover, in what capacity can we call ourselves just?

Canadian identity isn’t about Tim Horton’s or hockey or talking about the weather. It’s a strict, regulated hierarchy, with ever-changing rules about who is in and who is out, who counts and who does not. When we talk about “Canadians” we need to ask ourselves who we mean. Residents? Taxpayers? White people? People who were born here? Undocumented immigrants? People who vote? Those with citizenship? Each of these categories and identities holds a series of assumptions, and we need to confront those assumptions, about who belongs here, who gets to make decisions about Canada (including defining it), who is a desirable citizen, who is undesirable, and what the “cultural” part of multiculturalism really looks like. People’s rights and lives are at risk, and we need to start asking questions of ourselves and the government about how we are discussing citizenship, and the harmful effects it is having on all of us.