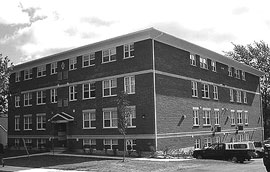 When I move out of my house at the end of April, it – along with its beautiful front porch – will be demolished to make room for another ‘big red person trap.’ Does this seem right?

Some animals are lucky enough to choose their surroundings. It would appear also that these animals choose their surroundings with their particular strengths and weaknesses in mind. The strength which has allowed the human species to outlast some of its obvious physical inadequacies has been the ability to communicate, and through it, the consequent ability to form effective social groupings. Since the first time a human uttered, “Watch out! Saber-toothed tiger behind you!” humans have understood the need for association in order to make decisions in the best interests of our species. We gathered in caves, then as a group moved bravely out into the open and together built the tools and structures, both physical and metaphorical, necessary to ensure our survival.

In recent years however we have retreated back to our caves, except this time we were not chased into them by big predatory cats. Our generation has willfully returned to the confines of the indoors. The decision was made easier though, now that we can fill our caves with entertainment technology and select a temperature that we feel to be comfortable, all to convince ourselves of how far we have come since our cave-dwelling days. Is it a coincidence that the further we move away from our social past and into a more individualistic society that we have increasingly made poorer and poorer decisions regarding the survival of our species as a whole? It is precisely this atomistic worldview that allows us to rationalize the purchasing of an SUV for personal use. We have a concrete example of this horrifying trend right here in Waterloo.

Here comes my gross exaggeration to highlight this phenomenon in local terms: developers like studenthouses.ca and the City of Waterloo Development Approvals Department are ‘conspiring’ to end the human race! Not completely true, but they have indeed conspired to deter us from meeting and discussing with one another. They have done this, with the help of willing students, by flattening our precious houses and replacing them with gigantic, grotesque and remarkably indistinguishable human containers that are multiplying like mould on beautiful streets like Ezra and Bricker. Sometime this century we allowed some jackass of an architect to convince us that we no longer needed front porches. Furthermore, we allowed a series of jackasses to come and knock down our existing porches. I would argue that we need these structural features now more than ever. Ever tried introducing yourself to a stranger by yelling from a third-story window? It does not provide the same opportunity for success that a porch does. This is how Laurier’s tight community was forged – through afternoon introductions and discussions on a front porch in September, not through a week of forced song singing.

If you agree with me, please register your feelings with our new mayor at www.city.waterloo.on.ca. If you do not agree, then lets talk about it. I’ll be on the porch.