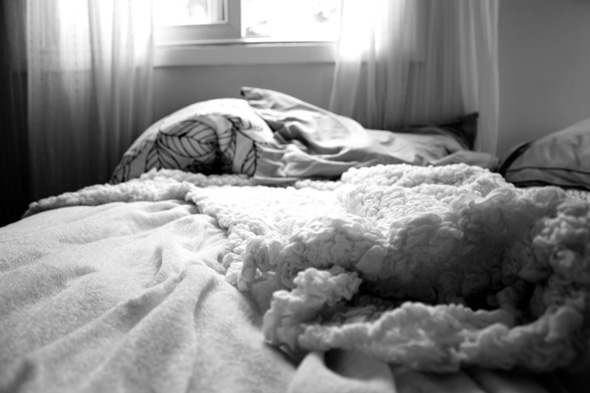 The girl yawns and rolls over to discover the boy asleep in bed beside her, forgetting she had invited him up at the end of the night after too many drinks. Sunlight streams in through the useless white curtains she has strung up over the window above her bed. The boy lets out a slight snore; a familiar noise from a face she has looked at for years. The girl catches her mouth smiling at the boy’s blond, scruffy beard, still bleached almost white from the summer, and bites her lip to stop herself. She squeezes her eyes shut, and buries her face in the pillow, blocking out the bright sunshine and the boy’s cloudless face. She lets herself sink back into the dark memory of last night, tonguing each of the short moments, pressing them for clues.

He had text messaged her after their group of friends had parted and wandered their own separate routes home from the bar. She had been in her bedroom, staggering into her pajamas.

The stars are unreal. Want to gaze?

Warmth spread through her alcohol-numbed body. At the beginning of the evening, she had learned that he thought she was cute. That he maybe found her interesting. But at the bar he had danced with all of her girl friends.

Yeah. Are you close?

She sat half-undressed on the edge of her bed, waiting for his response. If she remained dressed, expected him, she would be lighting her carefully darkened hope. The phone rang in her hand.

“I’m near your house…” his voice was calm, but held a laugh, every word seemed to both soothe and mock. “It’s a perfect night for star-gazing.”

She quickly put her going-out clothes back on, and touched-up her makeup. She threw a hoodie on over her dress, attempting to satisfy the “cute” appraisal he had given her.

She met him on the front lawn. They looked up. It was cloudy. He shrugged his shoulders into a laugh.

“There were stars just a moment ago…”

She smiled at him and felt her heart swell with assumption. She decided there had never been any stars. She decided he’d wanted to be alone with her since their first meeting the previous week.

Starless, they instead took turns gazing at each other, and looking away when the other met their eyes. They stood apart on the lawn; the grass was already too wet from dew to sit on, and her student house had no front porch. She waited for him to touch her, tried to give him excuses to just reach over, bridge the cold gap between their flushed bodies with his tanned arms. But all along she knew he wouldn’t, knew he couldn’t; it was her gap to bridge or not. So they remained apart, lusting separately after a shared fantasy. Too soon, their nervous small talk began to wear out. Then she noticed the couple across the street.

“Hey, look at them!” she whispered. A couple sat illuminated under the lights of the front porch of a house. A girl sat on a boy’s lap, legs around his waist, hands groping, lips sucking. They stood and watched the pair’s blatant intimacy, feeling the heightening lack of their own.

The girl reluctantly lifts her face from the pillow, opens one eye, and then the other, to find the boy still asleep in front of her. She examines the messy blonde hair she has run her fingers through countless times, the strong shoulders she has gripped night after night – prosaic on him, yet the same features ornament the unexplored body of the boy on the lawn. He wakes up, sees her watching him, and lifts the corners of his mouth in a smile. She shuts her eyes against him, hoping to conceal her furtive thoughts behind her lids. She turns her back to his, and allows his familiar body to mould itself around hers. His fingers promptly begin to re-walk the worn trail he has followed the last three years of their relationship, along her thigh, and under her shirt. She squeezes her eyes tighter, shut, and imagines the hands of the boy on the lawn.